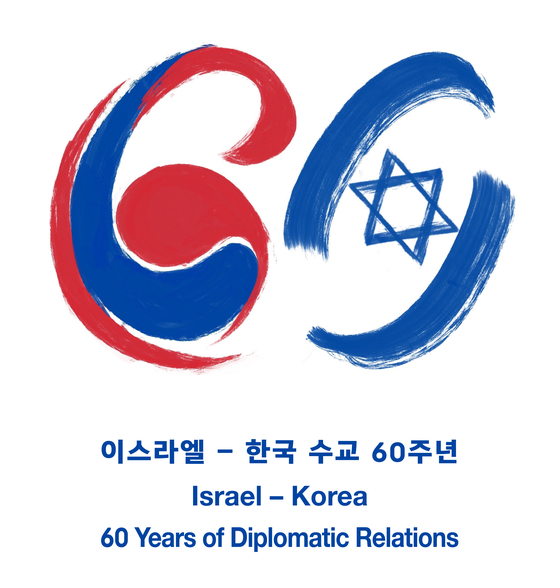 The logo to commemorate the 60th anniversary of Israel-Korea ties designed by Teresa Hyoju Chang. [EMBASSY OF ISRAEL IN KOREA]

A logo to celebrate the 60th anniversary of diplomatic ties between Israel and Korea has been selected, the Israeli Embassy in Seoul announced Tuesday.

“The wining logo was created by Teresa Hyoju Chang,” the embassy said in a statement. “The logo design is inspired by traditional Korean calligraphy and contemporary work by Israeli artist Menashe Kadishman. The slanted stroke reflects the dynamic relationship between Israel and Korea. The yin-yang of the flag and the Star of David are full of energy.

“The three elements of red and blue blend together and the swirling brushstrokes are more than just elements to the logo design,” it added. “It expresses the balance and synergy between Israel and Korea, and reflects the past, present, and future shared between the two countries.”

The embassy started a logo contest in June to commemorate the 60th anniversary next year.

Chang, the winner, is a 15-year-old resident of Seoul.

Korea and Israel established diplomatic ties in 1962. The two nations signed a free trade agreement (FTA) this year, the first FTA for Israel with an Asian nation, and Korea’s first FTA with a nation in the Middle East.