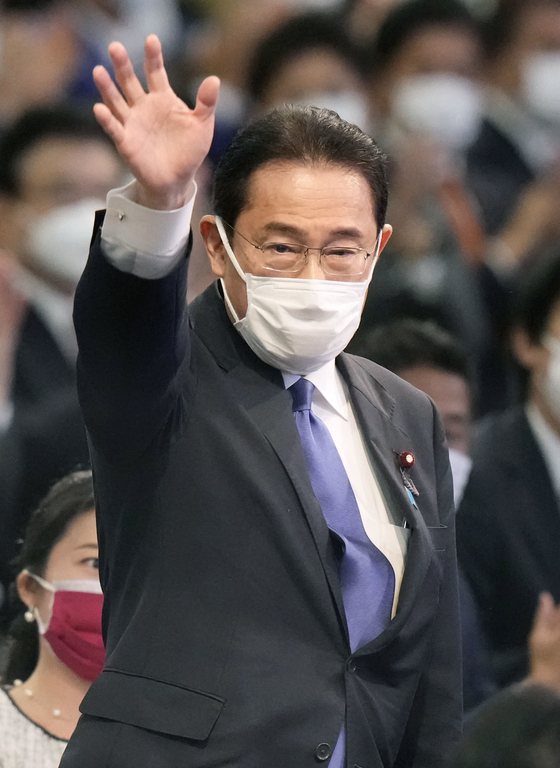 Japan's Prime Minister Fumio Kishida on Sept. 29 at a hotel in Tokyo, after clinching his victory in the election. Kishida's term in office began on Monday. [YONHAP]

Kishida made the statement during his first talks with the press since the election on Monday, according to Japanese media reports. Emphasizing the issue of Japanese abductees in the North, a thorny issue between Japan and North Korea for years, Kishida said he will prioritize their swift return to Japan, adding that he is willing to meet with Kim to discuss the matter.

The statement was not out of character for the newly inaugurated prime minister, who had been calling for a meeting with Kim over the abductions issue throughout his campaign. During a policy debate earlier in September, Kishida said that Japan should “consider all possible measures including a summit meeting” with Kim Jong-un to address the issue, according to the Japan Times.

Tokyo claims that 17 of its nationals were abducted by North Korea. Pyongyang held the position that the abduction issue was closed until 2002, when it admitted to having abducted 13 Japanese nationals, and returned five abductees and their families to Japan that same year, saying the remaining eight were dead.

In 2008, North Korea promised to open a reinvestigation of the abductions, but never followed through on its pledge.

Kishida took office on Monday, taking on the administration after previous Prime Minister Yoshihide Suga bowed out of office after just a year.

Kishida, known to be a more moderate politician than his immediate predecessors, announced his new cabinet, filled with allies of former Prime Minister Shinzo Abe. He retained current Japanese Foreign Minister Toshimitsu Motegi and Defense Minister Nobuo Kishi, Abe’s younger brother, in an indication of continuity of Tokyo’s diplomatic and security affairs as its seeks to work with Washington amid rising Sino-U.S. tensions in the region.

Kishida served as foreign minister under the Abe administration at the time of the signing of the so-called comfort women deal with South Korea in December 2015, meant to resolve the issue of Japan’s wartime sexual slavery.

The bilateral agreement received backlash from the victims and civic groups at the time because of a lack of transparency, and the Moon Jae-in administration said it will not scrap the 2015 deal but underscored that it was not a true resolution to the issue of Japan’s wartime sexual slavery.

Seoul and Tokyo also struggle over the issue of compensation of Korean forced laborers.

Relations with South Korea was reportedly not mentioned during Kishida’s first press conference.

The two nations have not held a summit since 2020, when Suga was inaugurated as the prime minister.

The G-20 summit in Rome on Oct. 30 and 31 was discussed among some experts as a possible venue for a bilateral summit, but Kishida said he will not be attending the summit due to the upcoming general elections on Oct. 31, according to some Japanese media outlets. The prime minister was also scheduled to attend the 26th UN Climate Change Conference of the Parties (COP26) in Glasgow, Scotland, in early November.

The Blue House on Monday congratulated Kishida on his election, adding that Seoul is ready to meet with and communicate with Tokyo for development of ties and issues of common interest.

Kishida spoke with U.S. President Joe Biden over a phone call on Monday, his first call with a foreign leader after the inauguration.

When asked on Tuesday on whether any calls are being scheduled between Kishida and Moon, Korea’s Foreign Ministry spokesperson Choi Young-sam said that “there is nothing that can be announced at this stage.”