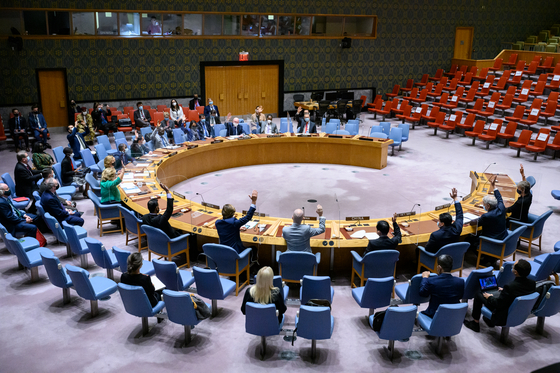 Representatives of the United Nations Security Council raise their hands to vote in favor of a draft resolution at the UN headquarters in New York on Sept. 30. [LOEY FELIPE/XINHUA/YONHAP]


North Korea continues to advance their nuclear and ballistic missile programs despite sanctions by the United Nations, a panel of experts of the UN Security Council said in a recent report.

“Despite the country’s focus on its worsening economic travails, the Democratic People’s Republic of Korea [DPRK] continued to maintain and develop its nuclear and ballistic missile programmes,” reads a report submitted to the UN Security Council by its panel of experts last month, which examined the effects of the sanctions on the North from February to August this year, using North Korea’s full name.

The panel releases its findings on the effects and any violations of the sanctions on North Korea twice a year, with a midterm report around August or September and a final report in March the following year. The midterm report dated Sept. 8 was published on the security council's website on Tuesday.

Although North Korea’s ballistic missile tests have reduced in numbers — one test launch of two short-range ballistic missiles this year, compared to four ballistic tests in 2020, 13 in 2019 and 15 in 2017 — the report found indications that activities at the North’s nuclear weapons facilities have continued. Under UN Security Council resolutions, the North is prohibited from testing ballistic missiles.

“According to a Member State, the external construction of the light water reactor seems to be complete,” the report said regarding the Yongbyon site, one of the major nuclear weapons facilities in the North, whose reactor is capable of producing weapon-grade plutonium from spent fuel rods.

It added that Pyongyang may be capable of delivering nuclear weapons “now miniaturized to fit ballistic missile warheads.”

The report also found indications that maritime exports from North Korea of coal and other sanctioned goods continued from February to August this year, though they were at a reduced level compared to the previous months.

“Maritime and financial investigations demonstrated increasing sophistication by both vessels and the management and ownership structures supporting them in order to evade sanctions,” it said.

The panel found that the vessels suspected of conducting activities in violation of the sanctions manipulated the vessels' automatic identification system, meaning the vessel in operation had registered itself as a different vessel under a different flag to avoid being caught.

“The Panel considers such vessel identity laundering as a sanctions evasion technique that directly enables suspect vessels to continue to deliver illicitly refined petroleum to the Democratic People’s Republic of Korea,” the report said.

Some of these vessels suspected to be carrying out sanctioned activities for the North were found in the waters in China. When asked about these vessels, China responded, according to the report, “Vessels suspected to be delivering refined petroleum products to the DPRK […] have not entered Chinese ports since 2020,” even adding that it “hopes that the Panel does not readily believe information which is against facts.”

Despite the sanctions in place, the panel of experts found indicators that North Korea still had access to international financial institutions including those in China, Russia and Indonesia, and that some countries in Southeast Asia had still allowed North Korea’s overseas workers to work in restaurants, whose revenue would end up going into the state coffers. The panel said investigations are ongoing on these allegations.

Noting the adverse humanitarian situation in the North, partly attributable to the lockdowns following the onset of the Covid-19 pandemic and Pyongyang’s restrictions on market activities, the panel stressed “the need for Member States to ensure that humanitarian aid to the country proceeds unhindered, consistent with the relevant resolutions.”