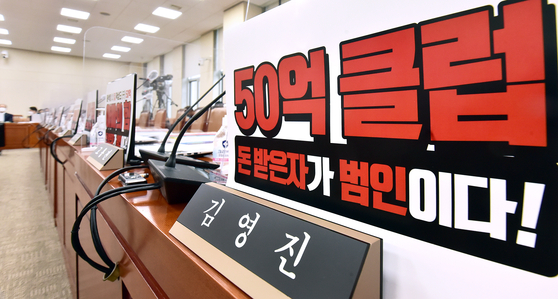 A sign placed in front of the seat of ruling Democratic Party lawmaker Kim Young-jin's seat on the Strategy and Finance Committee meeting room of the National Assembly on Tuesday describes those who received profits from the Daejang-dong development as criminals. [LIM HYUN-DONG]


Prosecutors on Tuesday were preparing to summon another key figure for questioning over his role in the snowballing land development scandal in Seongnam, following the arrest of a former executive of the Seongnam Development Corporation Sunday.

Extending their probe into allegations of political favors in the distribution of profits from the Daejang-dong land development project in Seongnam, Gyeonggi, the Seoul Central District Prosecutors’ Office on Tuesday were planning to question Kim Man-bae.

Kim is the owner of a small asset management company called Hwacheon Daeyu, which has featured prominently in the controversy over small private companies reaping disproportionate profits from relatively small investments in the project.

The controversy over Hwacheon Daeyu’s outsized profits has led to suspicions that Kim used his relationship with Democratic Party presidential frontrunner and Gyeonggi Gov. Lee Jae-myung to arrange a profit-sharing scheme favorable to his company.

Sources in the prosecutors’ office who spoke on the condition of anonymity to the JoongAng Ilbo said that prosecutors plan to question Kim over the origin of the funds he used to set up Hwacheon Daeyu, and how the company’s profits from the Daejang-dong development were used.

The Daejang-dong development project, which cost an estimated 1.15-trillion-won ($981 million), developed 968,890 square meters (239 acres) in Daejang-dong in Seongnam, Gyeonggi, as residential real estate. Since 2019, Hwacheon Daeyu allegedly raked in a profit of 57.7 billion won on an investment of 49.95 million won, which was a 1 percent stake in the project. 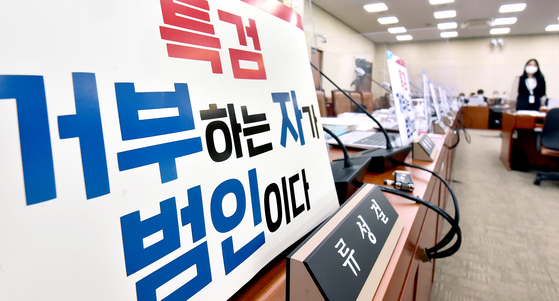 A different placard placed in front of the seat of opposition People Power Party lawmaker Yoo Sung-kull's seat before the Strategy and Finance Committee's meeting on Tuesday lambasts those who reject the proposal for an independent counsel probe into the development. Gyeonggi Gov. Lee Jae-myung has opposed such a probe. [LIM HYUN-DONG]


Prosecutors are also continuing their questioning of Yoo Dong-gyu, a former acting president of the city-owned Seongnam Development Corporation, which owned a 50 percent stake in the project yet only received 183 billion won in profits over the past three years.

Yoo, who was arrested Sunday evening after the Seoul Central District Court granted prosecutors’ request for a warrant, faces accusations that he designed the shareholder composition and profit distribution method of the mixed public-private Seongnam Park consortium, the developer of the Daejang-dong project, to favor Hwacheon Daeyu and its affiliates Cheonhwa Dongin No. 4 and No. 5.

Prosecutors suspect that Yoo made a secret agreement with Kim to set up a profit distribution scheme that would be advantageous to Kim’s company in return for a kickback of 25 percent of the profits of Hwacheon Daeyu and its affiliates, and that he already received 500 million won out of 70 billion won in total predicted profits in January.

Yoo is suspected of receiving his alleged cut of the profits through his ownership of Cheonhwa Dongin No. 1, another Hwacheon Daeyu affiliate, under a different name. Yoo's lawyer denied that allegation as “groundless.”

Yoo faces charges of bribery and causing losses to the Seongnam Development Corporation by granting favors to  Hwacheon Daeyu – accusations which he has denied.

Kim, too, denied engaging in any kind of illegal lobbying in relation to the Daejang-dong development when questioned by reporters on his way to the Yongsan Police Precinct in central Seoul late last month.

Both men are known to have ties to Lee, with Yoo having worked on Lee’s Seongnam mayoral and Gyeonggi gubernatorial campaigns and Kim being a former reporter who interviewed Lee in 2014.

The allegations against the pair have been fueled by recordings submitted to the state prosecution service by Jeong Young-hak, an accountant who owned Cheonhwa Dongin No. 5.

According to a source in the prosecution service, Kim, Yoo and others can be heard in the recordings discussing the distribution of profits from the project as well as delivering a payment amounting to 1 billion won ($844,170) to an insider at Seongnam Development Corporation.

The recordings also supposedly reveal that the owners and main shareholders of Hwacheon Daeyu and Cheonhwa Dongin No. 5 gave 404 billion won in profits from the Daejang-dong development project and hundreds of billions of won in apartment sales revenue to officials of the Seongnam Development Corporation, and that Kim used 35 billion won to lobby politicians, legal professionals, and officials at the Seongnam Development Corporation for the preferential profit distribution set-up.

In addition to the allegations that arose from the recordings, prosecutors intend to probe the circumstances behind a massive severance payment of 5 billion won received by former PPP lawmaker Kwak Sang-do’s son, who worked at Hwacheon Daeyu for seven years as a mid-level employee, as well as the reasons why an apartment that was owned by Hwacheon Daeyu later passed into the hands of former Special Prosecutor Park Young-soo’s daughter.

However, it remains unknown what role – if any – that the Gyeonggi governor played in the development’s investment and profit distribution structure.