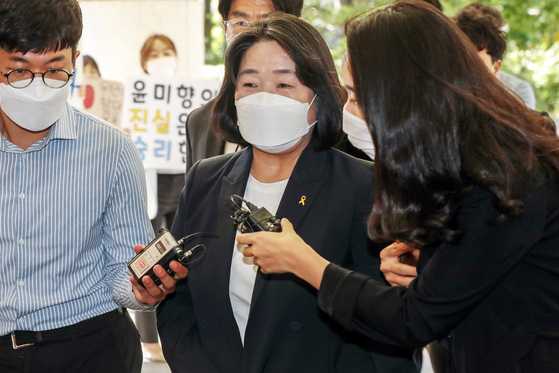 Prosecutors indicted Yoon, the former head of the Korean Council for Justice and Remembrance for the Issues of Military Sexual Slavery by Japan, in September 2020 for fraud, embezzlement and breach of trust following accusations that for decades she misappropriated donations to the so-called comfort women victims.

Yoon, currently an independent lawmaker, allegedly spent 137 million won of the group's funds between November 2011 and March 2020 for personal purposes, according to a copy of the indictment obtained by Jun from the Justice Ministry. The news was first reported by the Chosun Ilbo. She is accused by prosecutors of embezzling 217 times.

Records showed some funds were spent on "gifts for grandmothers," a reference to the comfort women survivors, but a significant portion of the donations appeared to be used for personal expenses including dining at restaurants, grocery shopping, snacks, massages, duty free shopping and even paying income taxes.

The documents indicated that Yoon transferred money raised for the comfort women victims in amounts ranging from 1,500 won to 8.5 million won to her private account and also used debit cards.

Prosecutors also allege that Yoon paid personal traffic violation fines from these funds including up to 60,000 won for speeding in April 2016.

In 2018, 2.55 million won was allegedly transferred to Yoon's personal account as a "general income tax" payment. There was also a bank transfer marked as "yoga instruction fee."

Yoon, a veteran activist speaking for the rights of the victims of the Japanese military's wartime sexual slavery before and during World War II, was elected a proportional lawmaker for the ruling Democratic Party (DP) in April 2020.

She came under scrutiny in May 2020 following public accusations by Lee Yong-soo, a comfort woman survivor, that Yoon had exploited her and other victims for decades. Yoon was accused of collecting donations using her personal bank accounts and was alleged to have committed accounting fraud.

The DP suspended Yoon in June over allegations of suspicious real estate purchases.

Yoon has denied the all allegations against her.

In a Facebook post Tuesday, Yoon accused the Chosun Ilbo of "defamation" and called for a halt to "malicious reports."

She claimed that that the reported details of alleged embezzlement "were accounted for as funds for public affairs," adding that other personal expenses came from her private account.

Yoon added, "I will overcome today's unfair situation brought about by the prosecution's unfounded indictment."