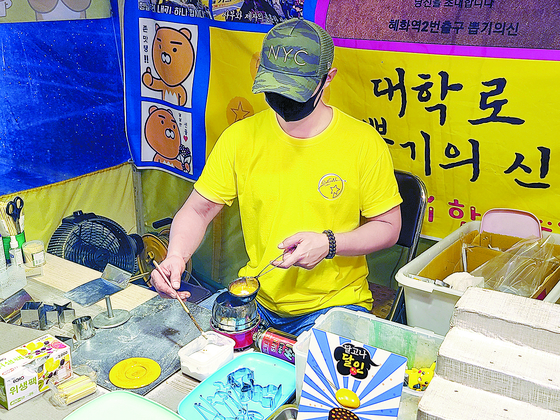 An Sae-hwan, 37, is making dalgona (a thinly spread Korean sugar candy with a stamped outline of a random shape) inside his 2-square-meter (22-square-foot) candy stand near Hyehwa Station in eastern Seoul on Monday evening. His candy stand distributed the candies to the production team of the viral Netflix Korea original series, “Squid Game.” [JOONGANG ILBO]


Wind and rain did not stop crowds of young people from standing in line at a dalgona stand near Hyehwa Station in eastern Seoul on Monday evening to have a go at the nation's forgotten childhood game which recently became a sensation after appearing in Netflix Korea's top new original series, "Squid Game."

An Sae-hwan is a 37-year-old worker at the dalgona stand that made the very treats used while filming "Squid Game." Dalgona is a thinly spread Korean sugar candy with a stamped outline of a random shape such as a circle, star or umbrella.

“I haven’t been able to leave the shop even to go to the bathroom because customers kept lining up,” said An. “I was certainly not expecting such a large crowd in this sort of bad weather.”

Dalgona is part of the second survival game featured in "Squid Game."

In the series, contestants are shot dead if they cannot not successfully carve out the stamped shape on the brittle sugar candy without breaking the shape, within 10 minutes.

However, the real-life penalty for a broken candy inside Korea’s small dalgona stands is usually just 2,000 won ($1.70) — the price of the candy.

But if customers do manage to skillfully carve out the image from the candy, they are rewarded with an extra dalgona for free.

In the 1990s, these candy stands used to be ubiquitous near schools around the nation. It was a popular sweet and a game for boys and girls alike.

But the candy's popularity plummeted in the 2010s when teenagers became more interested in smartphones and social media rather than playing outside with their friends.

An’s 2-square-meter (22-square-foot), slightly grungy candy stand is one of a few dozen remaining in the nation.

But since the premiere of “Squid Game,” the stand's sales have shot up.

Before the show, An barely sold 200 candies per day, but now, he sells over 500 dalgona.

An has been in the dalgona business for eight years.

Last year in June, An received a mass order of 700 candies from the production team of “Squid Game.”

An said that the order took two workers a total of 48 hours to complete, with a whopping 15 kilograms (33 pounds) of sugar.

“At the time, I was curious as to why they ordered so many candies because I didn’t know what the show was about,” said An.

According to An, the production team of “Squid Game” placed a very specific order, requesting that the candies be small enough to fit inside a round tin case and thin enough for some light to penetrate through.

After watching the entire “Squid Game” series with his wife, An said that he felt a deep sense of pride while watching the dalgona episode.

An also said that he was especially glad to see so many young people in their teens and 20s in line to have a crack at the dalgona game.

Many have never played the game before and only heard of it from their parents.

A 16-year-old female surnamed Im said that she watched the entire “Squid Game” series with her mother. “For people in my age group, you would have to be living under a rock to have not watched the series,” said Im.

Dalgona’s popularity is not limited to the Peninsula.

As one of the most watched series on Netflix worldwide, with more than 95 percent of the series’ viewers residing outside Korea, "Squid Game"’s global fame has people around the world raving about dalgona.

“A couple days ago, an American woman visited my stand and asked about the rules of the game,” said An. “Unfortunately, I couldn’t clearly explain to her because I don’t speak English.”

In Paris, France, a pop-up store for “Squid Game” opened on Saturday, and its dalgona station has been gathering huge crowds.

Dalgona kits are now sold on Amazon for around $29.99.

There are also viral social media challenges going around on video-sharing-app TikTok with a mission to carve out a perfectly shaped dalgona.

An said that he always strived to promote dalgona to the world. “I am so happy because I feel like I achieved this goal.”