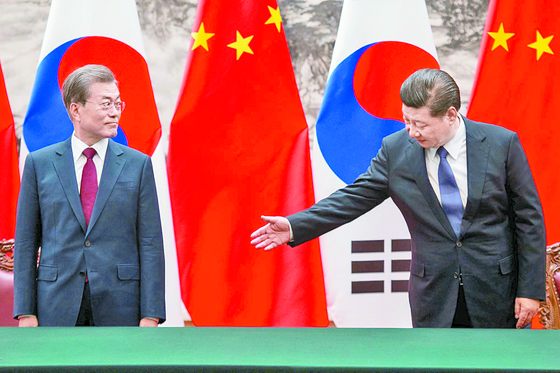 YOU SANG-CHUL
The author is director of the JoongAng Ilbo China Institute.


The United States and China may not be shooting guns at each other, but they are practically engaged in a war. The world is anxiously watching this hegemony contest. Meanwhile, 75 countries are the shrimps worrying about being crushed in the fight between the two whales.

Korea is one of them. As its security is tied to the United States and its economy to China, Korea must embrace both. That’s not easy. After the Biden administration unites the allies, China warns about the consequences.

The world is struggling to decide which side to stand with, but no country seems to have found a clear answer. Here, we need to consider one thing. What will the future be after the hegemony contest? If the United States stays on top, no major changes will occur. But what will happen if China wins? Here’s a book to refer to: Martin Jacques’ “When China Rules the World.”

Jacques predicted 17 changes that would happen if China took over the world. First, he predicted that world history will be sino-centric. As the capital of the world moves from New York to Beijing, the “tributary system” will return to international relations. While the state becomes the center, its civil society will be less emphasized and authoritarian rule by Confucian tradition will be presented. His predictions 10 years ago show a relatively generous view on China’s emergence.

But a number of recent actions by China ring alarms about the future. History will likely be distorted. China’s human rights commission defined the Korean War as an aggression by the U.S., for example. It conveniently removed North Korea’s invasion. In China, famous Korean poet Yoon Dong-ju is described as a Chinese and kimchi is advertised as Chinese food. I am worried that China will shake Korea’s national identity. A Chinese official said that a small country should follow a larger country. The 21st century version of the tributary system will surely return.

Social dominance by Chinese-style authoritarianism is also worrisome. China tends to use technology as a means to control society, rather than using it for the advancement of humanity. That’s “digital Leninism.” Personal liberty will be greatly shrunk.

The forecast for a future led by China is extremely worrying. The contest between the U.S. and China could quite literally determine which world we live in, in the future. Considering that, it is far too simplistic to think in the context of “security with the United States, economy with China.”

If China wants to win the hearts of the world and overtake the United States, it must first care about the concerns of its neighbors.