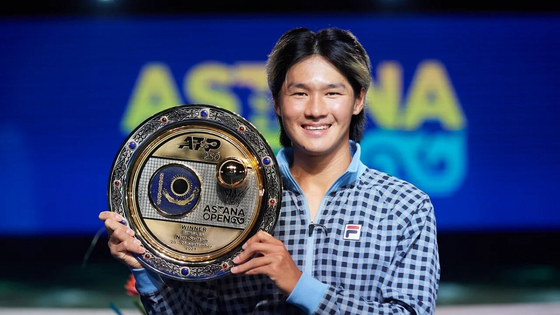 Kwon Soon-woo poses with the trophy after winning the Astana Open in Nur-Sultan, Kazakhstan on Sept. 26. [NEWS1]


Kwon Soon-woo reached a career high world ranking on Monday, climbing up to No. 55 after winning his first ATP Tour title on Sept. 26.

Last month, Kwon became the first Korean to win an ATP Tour title since Lee Hyung-taik, who won the Sydney International in 2003. Kwon and Lee are the only Koreans ever to win on the top-tier tour.

Kwon’s 55th position is two steps higher than last week’s 57th, which was also his personal best at the time. Kwon is now Asia’s second highest-ranked player following Kei Nishikori of Japan, who is three steps ahead of Kwon at No. 52.

Kwon emerged as a new Korean tennis hopeful in August, 2019 when he became only the third Korean tennis player ever to get inside the top 100.

Kwon will next compete in the BNP Paribas Open that starts Thursday at Indian Wells, California.