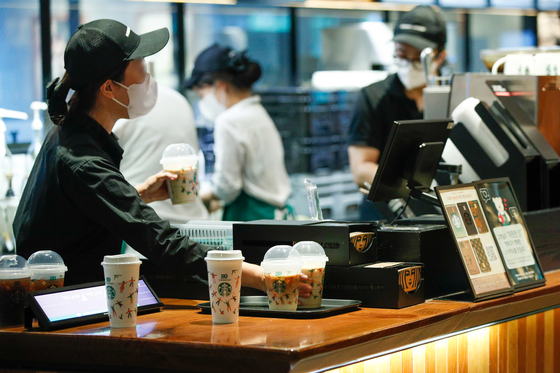 A Starbucks barista hands out orders to customers on Sept. 28 during the reusable cup day event. A free reusable cup was given with every order, and customers flooded coffee shops to get the free cups. [NEWS1]


Starbucks baristas are planning to protest on Thursday and Friday after a series of promotional events left employees overworked and coffee shops understaffed.

An unnamed Starbucks barista appeared on a KBS radio program on Wednesday morning, announcing that a group of baristas was planning to protest on Thursday and Friday.


The baristas will not strike, but have instead hired two trucks to drive around Seoul on Thursday and Friday. Billboards condemning the company will be attached to the trucks.

“We want to take days off using annual paid leave, but there are a lot of partners who can’t take all their annual leave due to the continuous promotional events,” said the barista on the radio. “I have 14 days of paid leave left this year, but have been working extra weekend shifts for three straight weeks.”

Partner is the term Starbucks uses for its baristas.

The barista added that their work is extremely difficult during promotional events, which Korea holds more than other Starbucks stores overseas. During busy events, many employees don't even have time to take a break, even though they are legally required to have a 30-minute break every four hours.

Starbucks Coffee Korea releases limited-edition merchandise 14 times a year for holiday seasons such as New Year’s Day, Halloween and Christmas. Fans of the coffee chain line up at stores to purchase the merchandise. Apart from the regular promotions, there are also many non-regular surprise events.

One of the most hectic events was the reusable cup day event on Sept. 28. A plastic cup, more substantial than a disposable plastic cup but not as sturdy as a tumbler, was given out for free with every drink on that day. Baristas struggled to keep up with the huge number of orders, with some shops reporting a backlog of several hours.

One post said that baristas have to spend time after work familiarizing themselves with long manuals regarding promotional events. With one or two events every month, baristas are forced to spend a large portion of their personal time learning the details.

Starbucks employees on Blind exchanged opinions via comments and messages to plan the protest. Although Blind is anonymous, the user’s workplace is revealed next to their nickname and they have to be verified using a work email address. A total of 3.3 million won ($2,757) was raised via Blind to hire the two trucks and pay for legal fees.

Song sent an email to baristas after the meeting, saying that the company was sorry for the excessive workload during the reusable cup day event on Sept. 28, and that it will map out corrective measures based on suggestions discussed with the baristas.