The popularity of Netflix Korea’s original series “Squid Game” seems to know no bounds, even proving to be a hit in China.

The keyword “Squid Game” garnered more than 1.7 billion hits on Chinese social media platform Weibo as of Monday, and Chinese online retailers are selling various merchandise themed after the show, a phenomenon also seen in other countries.

But there's a catch: Netflix is not available in China. Technically, people in China shouldn't be able to access the series due to the nation’s Great Firewall, but many are watching it anyway through illegal streaming and download websites. Many Koreans are expressing disdain toward the rampant online piracy of Korean content in China, and the popularity of “Squid Game” has made the issue much more tangible.

“Currently, Netflix is available in a total of 190 countries — which does not include China,” a Netflix official said. “There is currently no legal way to watch ‘Squid Game’ in China, and we are aware that viewers in China are not streaming ‘Squid Game’ legally. But this [online piracy in China] is not unique to ‘Squid Game.’” 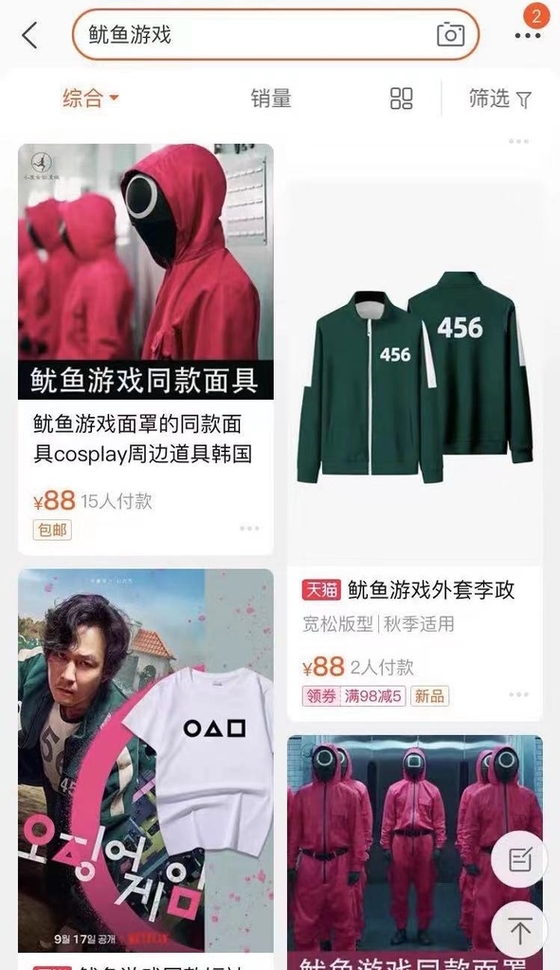 Numbered green tracksuits worn by contestants in the series, as well as the mask and pink uniform worn by henchmen, are listed for sale on Chinese online shopping mall Taobao. [SCREEN CAPTURE]


The official added that as of now, Netflix is not planning to take any particular legal action against the pirating of “Squid Game” or the selling of related merchandise. Instead, the platform recently announced a statement addressing this issue in general.

“Netflix expresses regret that content, produced by the hard work of creators, is being illegally copied and downloaded,” part of the statement reads. “We are cooperating with various monitoring agencies around the world to eradicate illegal content.”

Nonetheless, “Squid Game” continues to be the talk of the town in China. The show is ranking high on Chinese search engines’ frequently searched keywords lists. Hashtags related to dalgona, Korea’s retro candy made with a mix of melted sugar and baking soda stamped with random shapes, have surpassed 140 million clicks on Weibo after the snack appeared on the show.

As the candy-making pastime has become a fad among “Squid Game” fans around the world who want to try it themselves, dalgona kits are listed on Chinese online shopping mall Taobao for sale. 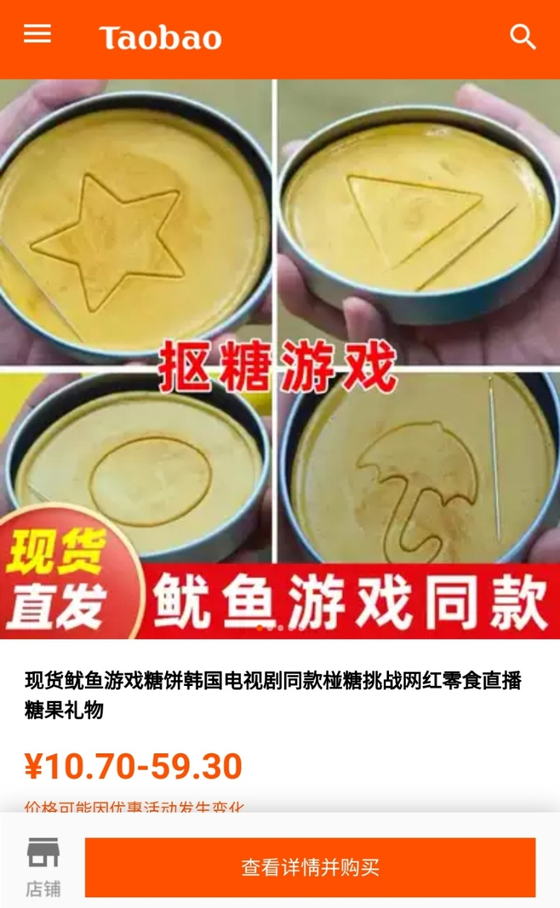 Kits to make dalgona, Korea’s retro candy made with a mix of melted sugar and baking soda stamped with random shapes, are also on sale on Taobao after it appeared on “Squid Game.” [SCREEN CAPTURE]


Numbered green tracksuits like those worn by contestants in the series, as well as the mask and pink uniform worn by henchmen, are also on sale. Dalgona kits and costumes are all listed with “Squid Game” in the product name.

While Koreans welcome the international success of “Squid Game” in other regions, the show’s popularity in China is rather frowned upon since it is a result of piracy.

“Even though Netflix is not available in China and the Chinese government has been pushing back against Korean content in recent years, there are always websites that distribute Korean shows illegally,” said Park Kyung-suk, a history professor at Yonsei University who specializes in modern Chinese history. “When I was living in China, I found out some websites even charge money for Korean content that they pirated. Even when a website gets taken down, another one springs up right away.” 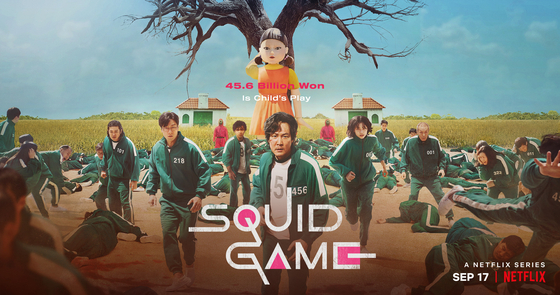 
According to the Korea Copyright Protection Agency, China is the top country of illegally distributing Korean cultural content — including television shows, films, webtoons and music — over the past five years. From 2017 until September this year, over 85,000 of the total 411,319 cases of copyright violation regarding Korean content happened in China, followed by the Philippines and Vietnam. Although not surprising considering China’s vast population, many Koreans express disdain that such a large viewership is consuming Korea’s intellectual property illegally.

“The disdain boils down to the fact that although China consumes a large volume of Korean content, the Korean firms that created them receive none of the profit that they rightfully deserve,” said Lee Gyu-tag, an associate professor of cultural studies at George Mason University Korea.

Korean content being pirated in China is neither new nor unique to “Squid Game,” but illegal distribution was usually kept relatively under the radar. This time, the visible popularity achieved by “Squid Game” over a short span of time has helped Koreans better grasp the extent of online piracy in China. 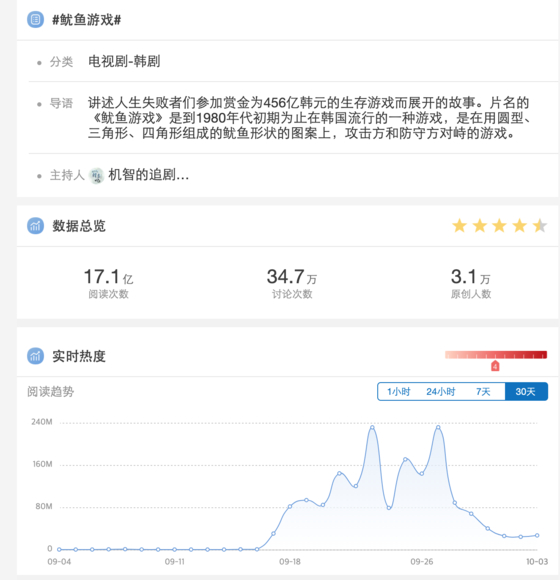 The keyword “Squid Game” garnered more than 1.7 billion searches on Chinese social media platform Weibo as of Monday, although there is no legal way to watch the show in China. [SCREEN CAPTURE]


At the same time, many Chinese people are also finding the show’s popularity ironic. Some online comments by Chinese netizens question whether it makes sense for “Squid Game” to openly appear as one of the most frequently searched keywords in China when it is not even allowed in the country.

“It is interesting to see parodies and memes about a technically unavailable show that's going viral,” said Professor Lee.

“This controversy basically summarizes the nature of cultural content consumption in China today. Chinese people seem isolated from outside cultural content, but they are actually still enjoying it through unofficial routes. The same goes for social media; platforms such as Facebook are not allowed, but many Chinese people use them via virtual private networks [VPN], although they may not be able to openly say they do. The Chinese government is increasingly strengthening its control on culture, but the Chinese public isn’t blindly following its regulations. They are finding their own ways to adapt to the system and continue to actively consume foreign content.”


Shortly before “Squid Game” launched last month, the Chinese leadership announced a series of bolstered regulations on pop culture in general under its “Rectification Movement” aimed to tighten its control. But that apparently did not stop “Squid Game” from gaining viral popularity. Is the Chinese government unwilling to intervene, or is it actually unable to?

“The Chinese leadership is definitely conscious of the show’s popularity, and is also fully aware that people use VPNs to access illegal distribution websites.” said Professor Park. “But what can it do? No matter how much control it has, it doesn’t have the means or the manpower to stop every single illegal website; no government does. Even if they impose stricter crackdowns, there will always be another loophole, like in any society.”

Due to such logistic difficulties, Lee added that the Chinese government is likely to continue turning a blind eye to most pirated content.

“Unless the content directly criticizes President Xi Jinping or the Communist Party, or has themes of subversion, the Chinese leadership won’t go out of its way to crack down on it,” he said. “They know that it’s not something they can realistically ban completely.”

“In fact, Korea also went through a similar phase under its military dictatorships. Korea only started allowing the import of Japanese pop culture in the late 1990s to early 2000s, but even way before that, Koreans were enjoying Japanese music and films via pirated cassette tapes and CDs. There used to be street vendors in city centers openly selling pirated tapes of Japanese content. The regime could have imposed stricter crackdowns but did not, because it knew that illegal copies would instantly reappear anyway.” 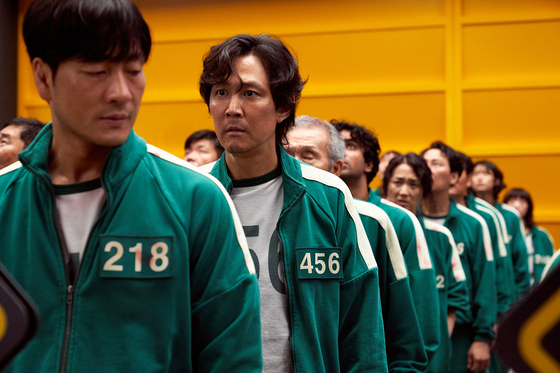 
Missing out on the rightful profit from the vast Chinese viewership is unfair for Korean production teams. In the long run, however, experts say it may not be a completely negative phenomenon.

“It seems like a huge loss, but it’s not like we can start legally charging for those shows anyway, since the Chinese government won’t grant permission in the first place,” Lee said. “Even when Korean shows are consumed under the radar, it still consequentially helps promote Korean culture. That can serve as a foundation for Korean content to succeed if China decides to ease its regulations on foreign content."

“Pirating is actually more tedious than you think,” Park said. “Illegal download websites in China disappear overnight, and then you have to find another website. I believe most Chinese viewers actually want to pay and watch Korean shows through a proper platform, but they don't have options. Both Koreans and Chinese people are unhappy about the status quo. So rather than simply condemning Chinese people for pirating, we can hope that the accumulated popularity acts in our favor if China does open up in the future.”