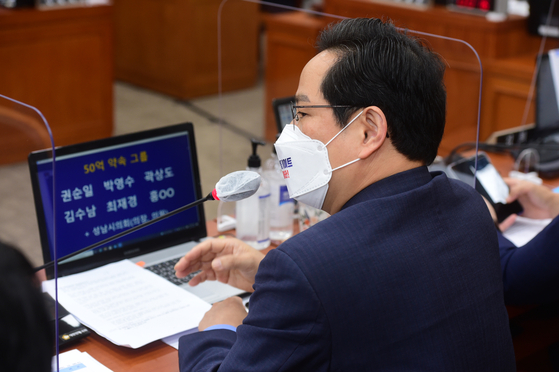 People Power Party lawmaker Park Soo-yong at an audit of the Strategy and Finance Committee at the National Assembly in Yeouido, Seoul, on Wednesday. [NEWS1]


A lawmaker from the main opposition party Wednesday released a list of bigwigs alleged to have been part of the "5 billion won club," named for the sum the Hwacheon Daeyu company allegedly promised anyone who helped it get an advantageous position in the profit distribution from the Daejang-dong project.

The lawmaker’s explosive claims added to a cascade of allegations surrounding Hwacheon Daeyu, which is at the center of a scandal over political favors and profits coming from the Daejang-dong land development in Seongnam, Gyeonggi, just south of Seoul.

Although controversy over the development’s profit distribution scheme initially focused on the connection between Kim Man-bae, the owner of Hwacheon Daeyu – a small asset management company that reaped a profit of 57.7 billion won on an investment of 49.95 million won in the project – and Democratic Party (DP) presidential frontrunner and Gyeonggi Governor Lee Jae-myung, whom Kim interviewed as a journalist in 2014, the scandal has since engulfed both major parties and implicated a wide range of people involved in the project.

The first major evidence in the case emerged when Jeong Young-hak, an accountant who owns Hwacheon Daeyu affiliate Cheonhwa Dongin No. 5, handed prosecutors 19 recordings of conversations between Kim and Yoo Dong-gyu, who was acting president of the Seongnam Development Corporation, about the distribution of profits from the project as well as the delivery of a payment of 1 billion won ($844,170) to an insider at the Seongnam Development Corporation.

The recordings also supposedly reveal that the owners and main shareholders of Hwacheon Daeyu and Cheonhwa Dongin No. 5 gave 404 billion won in profits from the Daejang-dong development project and hundreds of billions of won in apartment sales revenue to officials of the Seongnam Development Corporation, and that Kim used 35 billion won to lobby politicians, legal professionals, and officials at the Seongnam Development Corporation for the preferential profit distribution set-up.

Park cited Jeong’s recordings as the source of the individuals he named at the parliamentary finance committee’s audit, while claiming that not all of the people on the list received a cut of the company’s profits as promised.

Part of Park’s motive to release the names of the people supposedly promised money by Hwacheon Daeyu appeared to be to push back on arguments made by the ruling Democratic Party (DP) that the scandal mainly implicated the PPP.

“While the DP calls this a PPP scandal because lawmaker Kwak Sang-do was implicated, characterizing this scandal as the problem of a particular party only serves to obscure the whole truth,” Park said.

Prosecutors are currently investigating allegations of bribery against former main opposition People Power Party (PPP) lawmaker Kwak Sang-do, whose 31-year-old son received a severance payment of 5 billion won from Hwacheon Daeyu after working at the company for seven years as a mid-level employee.

The outsized severance payment – approximately 200 times the normal severance pay when considering Kwak’s son’s reported monthly salary of 2.5 million won – aroused suspicion that Kwak himself invested in Hwacheon Daeyu under someone else's name, and that his son's severance payment was an illegal payout for his investment.

Kwak resigned from the PPP on Sept. 26 and the National Assembly on Saturday, while his son’s home was raided by prosecutors on Saturday.

In response to Park’s announcement at the National Assembly, Park Young-soo, Choi Jae-kyung, Kwon Soon-il and Kim Soo-nam categorically denied the accusations he made against them.

“This bears no relation to the truth whatsoever,” said Kwon, a former Supreme Court justice. “I am extremely disappointed that [my] reputation has been tarnished in this way. I expect the truth will clear the allegations against me in time.”