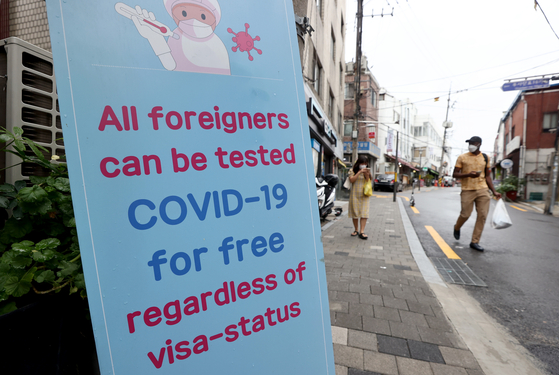 An English sign giving information on Covid-19 testing is installed in Itaewon, a popular residential district for foreigners in central Seoul, on Wednesday. [YONHAP]


Nearly 80 percent of Korea’s population will complete their vaccination by the end of this month, health authorities forecasted Wednesday, as the country accelerates its vaccination rollout.

“Currently, mainly second doses are being administered, and about 13 million people are expected to be jabbed this month,” Jeong Eun-kyeong, commissioner of the Korea Disease Control and Prevention Agency (KDCA), said at the National Assembly’s audit of the Ministry of Health and Welfare on Wednesday.

“We will shorten the vaccine interval and utilize the leftover vaccines in a bid to swiftly attain the goal of completing the vaccination of 70 percent of the population in October,” she said.

The administration of the second vaccine dose is in full swing for people aged 18 to 49, while it is scheduled to wrap up for those aged 50 to 54 on Saturday.

Once lagging far behind the U.S. and other countries in Europe in vaccinations, Korea shot up to rank second in the world for the average number of vaccines administered per 100 people over the last seven days as of Oct. 4, second only to Cuba, according to global statistics site Our World in Data by the University of Oxford.

As of Tuesday midnight, 27.99 million people, or 54.5 percent of the country’s population, have been fully vaccinated. If the government’s goal of 13 additional million vaccine recipients is added to this, the cumulative number of fully vaccinated people will be raised to 40.99 million — or 79.8 percent.

The number of people who have received just one dose of a two-dose Covid-19 vaccine reached 39.78 million, or 77.5 percent. Of these, over 90 percent were aged 18 and over.

The government is accelerating its vaccination campaign in a bid to shift into "a phased recovery to normal life," or what the government calls "With Corona," set for November.

Once the country shifts into its new Covid-19 strategy, it plans to stop counting the number of daily new infections and instead focus on treating those critically ill with the virus.

On Wednesday, Korea’s new Covid-19 cases rebounded to over 2,000 after a backlog of Covid-19 tests over the extended holidays. 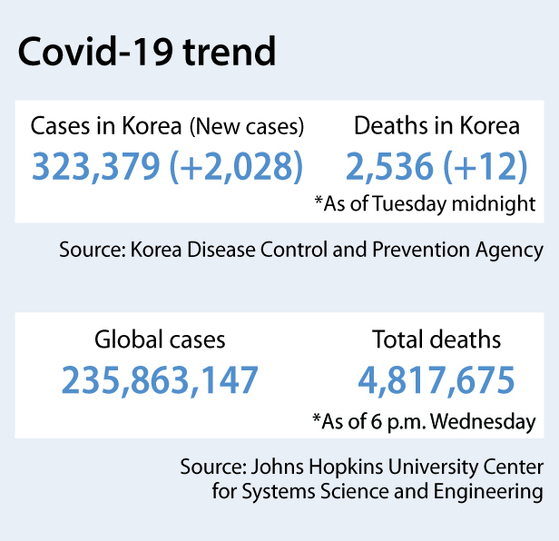 Cases had stayed below 2,000 over the past two days, but this was likely due to fewer tests conducted over the extended National Foundation Day weekend.

Twelve more deaths were added, bringing the death toll to 2,536.

Along with the rise in Covid-19 infections, health authorities expressed worries over the increase in breakthrough infections, or cases of a fully vaccinated person catching the coronavirus, despite the progress of its vaccination drive.

“The proportion of breakthrough infections increased from 8.6 percent in the first week of September to 20.8 percent in the fourth week,” Lee Seung-woo, a senior health official, said in a Covid-19 response meeting on Wednesday.

The KDCA predicted that daily infections can could top 5,000 by the end of this month if the virus situation worsens.

According to the agency’s data submitted to Rep. Baek Jong-heon of the People Power Party (PPP), daily cases were predicted to hover between 3,500 to 4,300 around late October, and 3,300 to 4,900 in late November if the current fourth wave continues at a steady rate.

But if the pandemic worsens, the data said cases could soar to around 5,000 by the end of this month and pass 5,000 in end-November.

The calculation was based on a mathematical model taking into account the current infection rate, transmission rate, fatality rate and vaccination rate, it said.

Health authorities said the country will be able to handle 3,000 to 3,500 daily patients with its current hospital beds, and added it will expand home treatment to people who are asymptomatic or have mild symptoms, as well as securing more hospital beds.