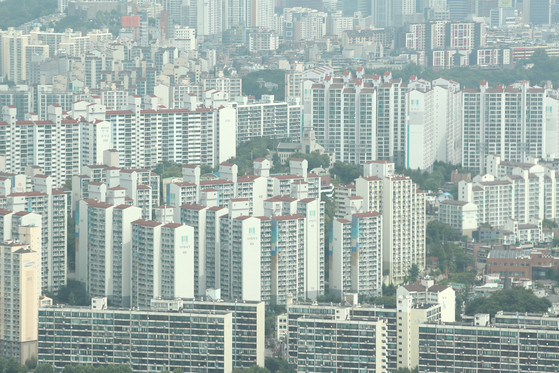 An apartment complex in downtown Seoul viewed from the 63 Square skyscraper in Yeouido, western Seoul, on Aug. 22. [YONHAP]


The percentage of single-person households in Korea surpassed 40 percent for the first time.

According to a data from the Ministry of Interior and Safety released on Wednesday, single-person households registered in the residents’ registration system reached 9,367,439 in September, or 40.1 percent of the total. 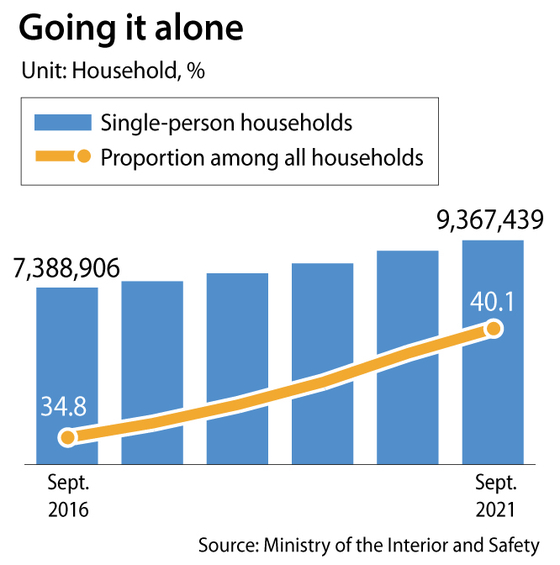 The rapid aging of Korea’s population is the main cause.

Women aged 70 or older accounted for the biggest group among single-person households, constituting 13.7 percent of the total.

“Elderly women tend to live longer than elderly men, so it is highly likely that they end up not living with children and remain as single-person households,” said Cho Young-tae, a population research professor at Seoul National University Graduate School of Public Health.

An increase in unmarried men in their 30s also attributed to the rise in the number of single-person households. They accounted for the second-largest group with a total of 987,000, or 10.5 percent.

“Housing prices skyrocketed while my job search got longer," said Mr. Lee, a 31-year-old office employee, "and I think it will take a long time to even start thinking of getting married.”

Analysts suggested that the residents’ registration system figures may be a bit of an anomaly.

“I believe there are many cases of people who live with their families but applied for separation from them in the residents’ registration system,” Professor Cho said.

Being registered as living alone, Cho said, gave some advantages in getting housing.

“So the number of single-households registered in the residents’ registration system is bigger than those who actually live alone," said Cho.

The total number of households reached a record high of 23,383,689, partly because of increasing fragmentation. The average number of household members continued to decrease from 2.31 in 2019 to 2.24 in 2020 and 2.21 in September this year.

Local governments are rolling up their sleeves to support the “home-aloners.”

The capital city Seoul, where 42.8 percent of residents live alone, is coming with measures such as installing “smart plugs” to check electricity usage to prevent seniors dying alone, and operate a social networking program for young single-householders.

“It is necessary to perceive the increase in the single-person household as a new phenomenon rather than a social problem,” Cho said.

“Considering that many policies in Korea, such as taxation and welfare systems, are centered on three or four-member households, it is now time to look ahead and check whether they are suitable for single-person households.”