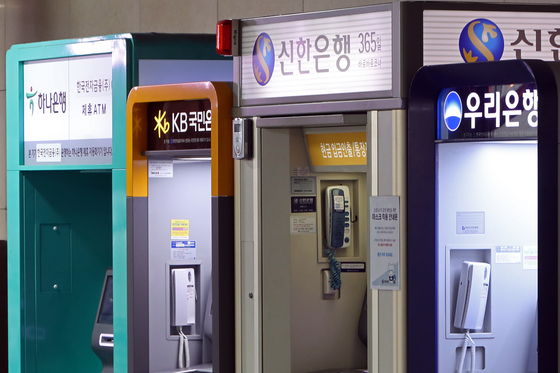 
Loans to small and medium sized enterprises are on the rise as banks are forced to clamp down on household loans.

According to the Korea Federation of Banks (KFB), the five major banks — KB Kookmin Bank, Shinhan Bank, Hana Bank, Woori Bank and NH Nonghyup Bank — lent 508.5 trillion won ($427 billion) in corporate loans as of June, up 12 percent from March 2020, when businesses started to be affected by the pandemic.

“Big global companies can raise money through issuing bonds and can even borrow money from foreign banks, and are thus less reliant on local banks,” said a spokesperson for a local bank.

Household loans rose 10 percent to 601.5 trillion won as of June, a lesser pace than the increase in corporate loans. The government has been pressuring banks to help it tame the growth of household debt. 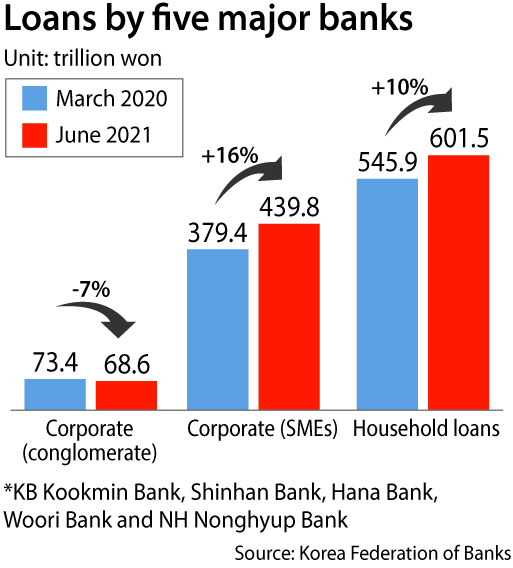 Lending to companies is an area where the major private banks have an upper hand over internet-only banks.

“There are low entry barriers for banks wanting to lend to households, and we have to compete with internet-only banks,” said the bank spokesperson. “However, giving corporate loans is an area that’s hard for internet-only banks to tap into since corporate customers not only look for loans but also want access to foreign exchange services.”

The pandemic is another factor in the increase in corporate loans. According to KFB data, the amount of loans borrowed by hotel and food businesses — industries hit hard by Covid-19 — rose 17.5 percent in June compared to March 2020. Wholesale businesses followed, with their loans rising 14.7 percent.

Banks have been increasing the amount of loans to SMEs and small merchants since last year as many are financially affected from the pandemic. In September, Financial Services Commission (FSC) Chairman Koh Seung-beom announced that financial institutions would extend debt maturities for another six months, until March 2022, for small businesses struggling to pay them back during the pandemic.

But banks will suffer if customers can't pay back when the debts come due.

Lee Byung-yoon, a head researcher at the Korea Institute of Finance, says non-performing loan indicators can be misleading in the current situation. The true weakness of a bank's loan portfolio will take time to become evident due to the extensions of loans.

“We need to focus on mitigating risks rather than feeling relieved about the current low non-performing loan ratio,” said Lee.