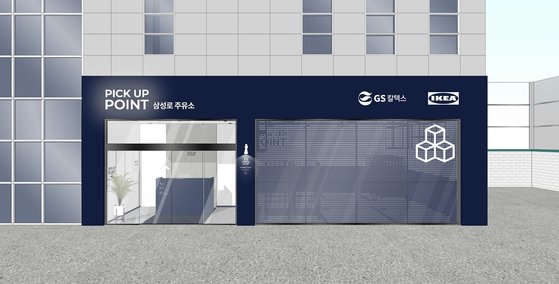 
Ikea Korea said on Tuesday that it has teamed up with GS Caltex to enable furniture pickup at gas stations after receiving complaints about its high charges for delivery and as the competition has started to cut or eliminate charges.

The move comes as the company faces stagnation in growth as a result of the pandemic and challenges in the market.

Ikea customers will be able to designate a gas station close to their home upon placing an order online. Delivery to the gas station costs 19,000 won ($17).

Ikea’s latest service was added after customers railed against its high delivery fees, which run as high as 59,000 won.

Ikea’s response to the competition is not a simple one. At first, only one gas station will be served, a GS Caltex in Gangnam, southern Seoul.

Ikea plans to expand the areas available to six gas stations by the end of the year.

They will be located in Pyeongtaek in Gyeonggi, Cheonan in South Chungcheong, Changwon in North Gyeongsang, Daejeon and Daegu. More gas stations could be added if the response is good.

A spokesperson for GS Caltex said that a gas station offers “enough space for a logistics vehicle to enter” and that the stations are located throughout the country.

It announced last week that it is opening an interior exhibition space at Hyundai Department Store in Ilsan, Gyeonggi.

At the 677 square meter (7,287 square feet) space, a model house will allow customers to see products in a realistic environment.

Hyundai Livart has been expanding its offline presence this year, with the opening of nine new stores with a plan to add six more next year.

A spokesperson for Hyundai Livart said that the company is “improving the retail network as customer expectation for the living environment has increased.” The spokesperson added that “Hyunai Livart will continue its effort to establish a premium brand image by expanding the [retail] network.”

Ikea in the city