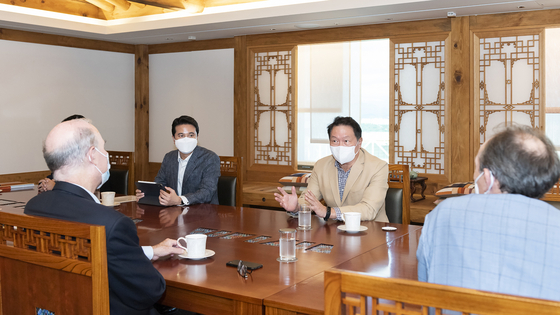 
SK Group Chairman Chey Tae-won had meetings with heads of major U.S. hydrogen companies in a move to consolidate their partnerships to cooperate in achieving net-zero carbon emissions.

According to SK Group, Chey met with Andrew Marsh, CEO of New York-based hydrogen company Plug Power Wednesday, at the Korean company’s headquarters in Jung District, central Seoul, and promised a close cooperation in the progress of leading carbon neutrality.

“The hydrogen-related core technologies that Plug Power owns and SK’s energy-related infrastructure and network are meaningful in that they can create synergy effects in achieving net-zero in both Korea and the United States at an early stage,” Chey told to Marsh during the meeting. “Let’s maintain our close cooperation to accelerate our entry into the hydrogen market in Asian countries."

Chey’s meeting with Marsh came after SK E&S signed an agreement with Plug Power Wednesday to establish a joint venture to join forces in expanding hydrogen business in Asian countries. The two companies agreed to build a factory and a research center in Seoul metropolitan area that can mass manufacture the critical technologies to produce hydrogen, such as hydrogen fuel cells and water electrolysis by 2024. They aim to sharply cut the price of hydrogen and supply it to Asian countries including Korea.

SK E&S, an energy company 90 percent owned by SK Inc., will have 51 percent of the joint venture and Plug Power the remainder.

Plug Power has received cooperation requests from many companies in Asia, but it decided on SK Group considering the reliability and network the company has, Marsh told to Chey during the meeting.

On Wednesday, Chey also had a meeting with Jeff Bishop, CEO of Key Capture Energy (KCE), to discuss their partnership in the energy solutions market.

Grid solutions refer to a new industry in the energy sector that aims to achieve a balance between the supply of and demand for electricity. KCE's ongoing projects save renewable energy on energy storage systems (ESS) and redistribute it to where it is needed through transmission and distribution networks using artificial intelligence technology.

They are considered not only environment friendly but also profitable businesses because the electricity generated from natural sources can be saved on the ESS when demand is low and sold at higher prices when demand is high.

Grid solutions are a core technology in achieving net-zero carbon emissions as securing the safety of electrical grids is important as anything in accelerating the spread of renewable energy in the future, according to Chey.

“The reason why Chey has been encouraging SK affiliates to achieve carbon neutrality is because he thinks ESG management has now become a universal value,” said a spokesperson for SK Group. “Chey’s recent meetings with heads of U.S. energy companies also show his determination to accelerate the ESG management."