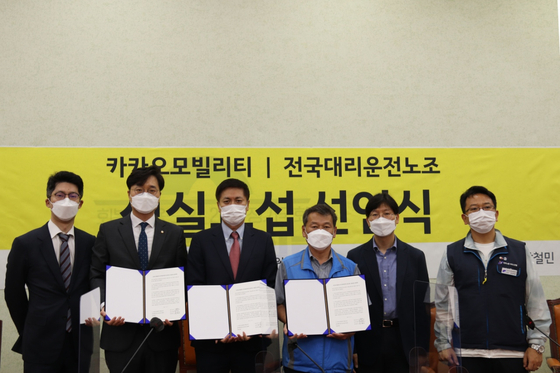 Representatives from Kakao Mobility and a labor union of designated drivers pose after signing an agreement to begin collective bargaining on Thursday. [OFFICE OF REP. JEONG MIN-CHOEL]


Kakao Mobility has agreed to begin collective bargaining with a labor union that represents drivers offering some of its services, an about face after Kakao, which controls Kakao Mobility, came under intense government scrutiny recently for its business practices.

The company signed an agreement Thursday to faithfully negotiate with the union representing designated drivers, which are chauffeurs that pick up customers that can’t drive their own vehicles.

The operator of the Kakao T app initially refused to enter into negotiations saying that the drivers aren’t employees of the company.

With the agreement signed, the two parties will likely discuss a wide range of issues, including service operations and a new commission policy.

Kakao T, run by Kakao Mobility, will abandon its fixed-rate policy for its designated driver service and switch to a variable rate between 0 percent and 20 percent depending on supply and demand.

The designated driver service was once considered an auxiliary feature of the taxi-hailing app, but it quickly grew to become a major component of the business, which has 150,000 registered drivers.

Kakao Mobility has exited some businesses that are blamed for competing with small, independent stores or those that charge high commissions.

It stopped a taxi-hailing option called Smart Call on Thursday, in which extra fees are charged to connect users with taxis more likely to accepting their ride requests.

The closure follows a decision to phase out a service delivering flowers, desserts and salads, which overlaps with the businesses of many small companies.

The realignment came as Kakao is taking seriously the government’s attacks on big internet companies due to their rapid business expansion, seen by some critics as hurting small, mom-and-pop stores.

Kakao Chairman Kim Beom-su offered an apology during a parliamentary hearing on Tuesday, announcing a set of measures in response to the criticism.

He vowed to exit businesses seen as problematic. The operator of Kakao Talk has been under fire for running reservation systems for hair salons, nail salons, flower shops, indoor golf venues, cram schools, chauffeur services and more, and collecting commissions from them.

Shares of Kakao rose 5.75 percent on Thursday, a notable gain following a rapid decline in the price in part due to the government’s recent campaign.