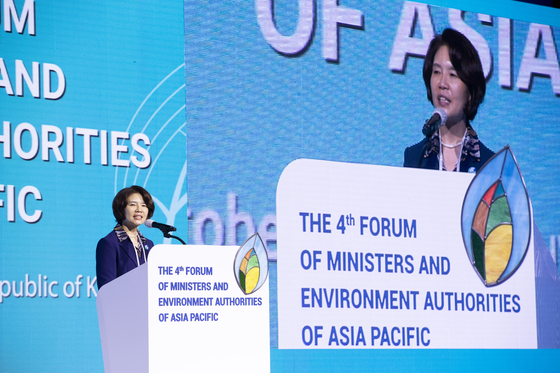 
Korea wants to take a more active role in the world achieving carbon neutrality, President Moon Jae-in stressed in a multilateral environment forum Thursday, and he called on Asia-Pacific nations to "accelerate" their responses to the climate crisis.

"Our earth is warming way faster than expected, and unfortunately the Asia-Pacific region is vulnerable to the impact of the climate crisis," said Moon in a video message to the Fourth Forum of Ministers and Environment Authorities of Asia Pacific.

In 2019, 40 percent of natural disasters around the world, including typhoons, floods and droughts, occurred in this region, Moon pointed out.

"However, our preemptive preparation and response can turn the crisis into an opportunity to realize sustainable development by combining digital economy with green industries including renewable energy and hydrogen economy," Moon said. "And our action towards carbon neutrality must equally be accelerated." 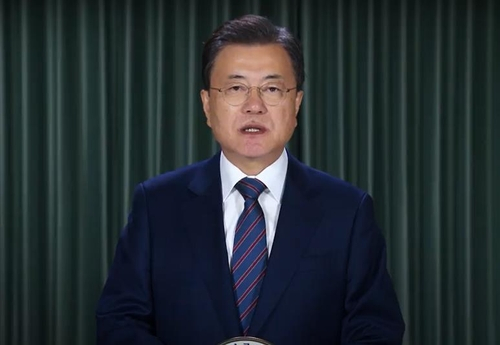 The three-day forum organized by Korea's Ministry of Environment and the United Nations Environment Programme (UNEP) was held in Suwon, Gyeonggi, a city that is home to the Hwaseong Fortress, a Unesco World Heritage site.

"Korea aspires to take on a more active role in the world's achieving carbon neutrality," said Moon, by hosting the 28th session of the United Nations Climate Change Conference (COP28) in 2023.

"We are also speeding up our transition to a low-carbon economy," said Moon. "Businesses our voluntarily scaling up their investment in renewable energy, turning carbon neutrality into opportunities to grow and create more jobs."

The Korean Green New Deal policy will invest $52 billion by 2025 to enable this process.

He added, "By sharing these experiences with the international community and expanding green ODA [official development assistance], we will help developing countries to better respond to climate crisis."

Moon stressed the importance of coexistence with nature, preservation of oceans and the forest ecosystem, protection of biodiversity, restoring an ecological balance and resolving the ocean plastic pollution issue in cooperation with the United Nations.

"The Asia-Pacific region is home to more than 60 percent of the world population, growing at the fastest rate in the world," said Moon. "Moreover, our longstanding tradition and culture of having valued an environmentally friendly life is a source of ample potential for our region to surmount the climate crisis the humanity is facing and to lead an inclusive green transition."

Moon said that Korea plans to unveil its enhanced 2030 nationally determined contributions (NDC) target at the COP26 in Glasgow, Scotland, in next month.

This marks the first in-person multilateral conference hosted by Korea since the outbreak of the Covid-19 pandemic and comes ahead of a session of the UN Environment Assembly, the world's highest-level decision-making body on environmental issues, next February.

"A joint action in the Asia-Pacific region for green recovery and carbon neutrality is an urgent task for all of us," Korean Environment Minister Han Jeoung-ae said in an address to the forum. "Each country has a different level of economic development. The severity of the damage caused by the climate crisis is also different."

She continued, "It is now time for the Asia-Pacific region to demonstrate the power of solidarity again to overcome the climate crisis."

Han urged governments, stakeholders, and future generations in the region to create a blueprint for green recovery and use the forum as a "venue for solidarity in environmental cooperation."

She said, "In order to effectively respond to natural disasters, such as floods, droughts caused by abnormal weather we must protect nature and restore it from damage," drawing sustainable energy from nature and restoring nature to its original state and protecting it.

"These are the actions we must start now for our future generation."

The Forum of Ministers and Environment Authorities of Asia Pacific was inaugurated in 2015 and convenes every two years. The previous forum was held in Singapore in 2019.

Korea to reduce ultrafine dust levels by a third over decade