Prosecutors dropped charges against Seoul Mayor Oh Se-hoon on Wednesday over allegations that he spread false information during the Seoul mayoral by-election in April. 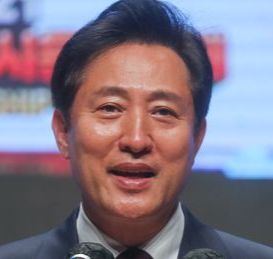 
"Even if the comments during the candidate debates were not true, they do not constitute to spreading falsehood as per the Public Official Election Act if they were made to refute allegations made against him," the team that handled the case at the Seoul Central District Prosecutors Office said.

The decision was based on the Supreme Court's en banc precedent that it should be cautious to punish remarks made in debates for false information unless Oh intentionally said something false.

The move is aimed at ensuring a wide range of freedom of political speech by minimizing intervention by the prosecution and the court in the remarks of candidates' debates.

Oh was accused several times in April of violating the Public Official Election Act during TV debates in the run-up to the Seoul mayoral by-election.

The ruling Democratic Party raised suspicions in March that Oh was involved in designating his wife's family’s property in Naegok-dong in Seocho District, southern Seoul, as low-cost, state-sponsored housing in 2009 during his previous term as Seoul mayor, and received 3.6 billion won ($3 million) in "self-compensation."

Oh, then a candidate, denied the suspicions and said during the debate, “I didn’t know about the existence or location of that land, and the designation of the district was an arbitrary decision by the director of the housing project.” The Democratic Party accused him of making a false claim.

The prosecutors also dropped the cases of Mayor Oh’s alleged violations of the Election Law regarding his remarks on the Pi City development project and participation in far-right rallies.

Oh was accused by a civic group after he said in April during the pre-election debates that he had nothing to do with a failed multi-million-won urbanization project, called Pi City.

Pi City began in 2004 as a project to develop a 30,000 pyeong (1,067,495-square-foot) site in Seocho District into a logistics complex with department stores, office space and logistics facilities. But suspicion of corruption and evidence of bribery were revealed during the authorization process.

The project was approved by the Seoul Urban Planning Committee in 2008, when Oh was mayor. But the project collapsed in 2009 because the construction company in charge of the project, also called Pi City, could not repay its loans.

Oh was also accused of lying after saying that he had only “once” participated in street rallies led by right-wing pastor Jun Kwang-hoon.