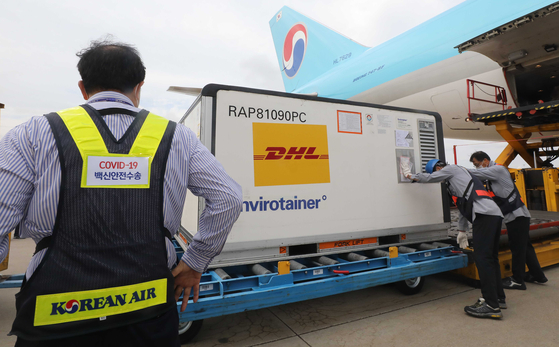 Workers unload boxes carrying some 94,000 doses of Pfizer's Covid-19 vaccine at Incheon International Airport on Thursday. This is the first batch of a total of 1 million doses of Pfizer vaccines that Britain agreed to send to Korea under a bilateral vaccine swap deal. [YONHAP]


The Korean government said Thursday it is negotiating with pharmaceutical companies to buy more Covid-19 oral medications, in addition to an order for 20,000 courses of an antiviral pill.

At the National Assembly’s audit of the Ministry of Health and Welfare on Thursday, Rep. Kang Gi-yun of the People Power Party (PPP) voiced concern that the country would be in need of more Covid-19 medicines when it shifts into the so-called “With Corona” policy, or taking a new approach to the coronavirus beyond social distancing.

Jeong continued, “Discussions are underway to find additional oral Covid-19 treatments,” and added, “I hope that National Assembly will help with a budget.”

On Wednesday, Prime Minister Kim Boo-kyum confirmed that the country signed a deal to buy 20,000 courses of oral Covid-19 treatments, but he didn't specify from whom.

“We have a budget to buy enough drugs for 40,000 people and have signed a pre-purchase deal for about 20,000 courses,” Kim said in a radio interview on Wednesday.

The KDCA later confirmed that Korea has procured 20,000 oral Covid-19 treatments and is "in the process" of inking another deal, but refused to disclose details due to confidentiality agreements signed with pharmaceutical companies.

Oral treatments developed by MSD (known as Merck & Co. in the United States and Canada), Pfizer and Roche have begun Phase 3 clinical trials overseas. MSD’s molnupiravir — which the U.S. drugmaker said can cut the chances of dying or being hospitalized by half — is ahead of its competitors, and is awaiting approval by the U.S. Food and Drug Administration.

The KDCA earlier announced that they allocated 16.8 billion won ($14.3 million) of this year’s supplementary budget to purchase oral Covid-19 treatments for 18,000 people, and 19.4 billion won to buy enough for 20,000 people in next year’s budget.

The government said it will cover all expenses for Covid-19 oral medication if such a treatment is introduced. The money earmarked for 38,000 doses works out to around 952,600 won ($800) per dose.

Covid-19 has been classified as a Level 1 legal communicable disease, and the government must cover the entire cost of treatment for such diseases, as described under the Infectious Disease Control and Prevention Act.

The costs of antiviral medications approved to treat severe Covid-19 patients in Korea — such as remdesivir by the United States' Gilead Sciences or Korean-made regdanvimab by Celltrion Healthcare — are also covered by the government.

The government plans to offer oral treatments to high-risk patients who are critically ill and have a high risk of dying.

A prediction by health authorities was also made Thursday that Korea could start adopting “With Corona” strategies as early as Nov. 9. This is the first time that the government mentioned any specific timing.

“I believe [Korea will hit the goal of completing vaccinations of 70 percent of the population] by Oct. 25 or the beginning of that week,” the KDCA commissioner said in the National Assembly audit. 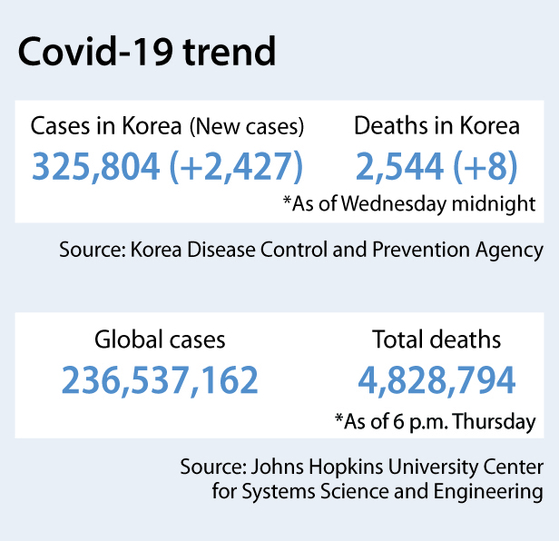 “I believe the country can start shifting into a phased recovery to normal life around Nov. 9,” Jeong added, considering that it takes two weeks to build immunity after the final dose.

As of Wednesday midnight, 55.5 percent of the country’s population had completed their vaccinations.

In addition, the agency said Thursday it will add menstrual disorders to the list of adverse reactions after Covid-19 jabs.

Although a lot of women complained of changes to periods and unexpected vaginal bleeding after a Covid vaccine, they weren’t listed as a side effect of vaccines and were put together in the “Others” section.

According to data released by Rep. Kang Sun-woo of the Democratic Party (DP), the KDCA received 712 reports of post-vaccine unexpected vaginal bleeding as of Sept. 27.

“We will operate a monitoring system to track the cases of menstrual disorders after vaccination,” Jeong said. “We will study the causality and the occurrence with experts.”

Meanwhile, Korea reported 2,427 new Covid-19 cases on Thursday, including 2,400 local infections, raising the total caseload to 325,804, according to the KDCA. Eight more virus deaths were added, bringing the death toll to 2,544.