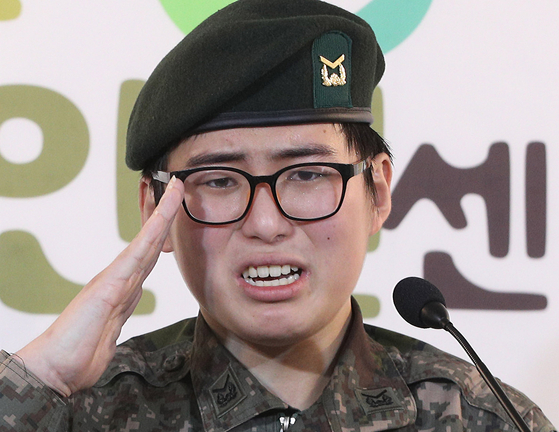 The late Sgt. Byun Hee-soo, a transgender soldier, held a press conference at the Army Human Rights Center in Mapo District, western Seoul, last year and told the public that she had been discharged from the Army because of her gender reassignment surgery and asked the Army to repeal its decision. [YONHAP]


The court on Thursday ruled in favor of a deceased transgender soldier who was forcibly discharged from the Army after undergoing a male-to-female sex reassignment surgery.

The Daejeon District Court said in a ruling that the late sergeant Byun Hee-soo was clearly a female by law and also strongly advised that the Army annul their statements that described Byun as mentally and physically disabled due to the loss of her male genitals and rescind the decision to dismiss her from the Army.

“Since the late sergeant filed for a legal gender status change to the court after her gender reassignment surgery and reported her changed sex status to the Army, the Army should have determined her mental and physical state in regards to her as a woman, not as a man,” said the court ruling.

The court went on further to say that the Army needs to comprehensively review its current regulations on sexual minorities in order to better ensure the basic rights of gender minorities in the military and also align the Army’s dated values and rules to match those of the contemporary media and public.

The late Sgt. Byun Hee-soo, 23, underwent a sex-change operation in Taiwan during her temporary leave from the Army base in northern Gyeonggi, in November 2019.

When she returned to Korea after the surgery, she applied for a legal gender status change at court and at the Army.

The Korean government recognized her as female, and all her legal documents, such as family register listings, were altered to read as female as well.

However, when she wished to return to her job as a female staff sergeant, the Army hospital deemed her mentally and physically ill because of her missing genitalia, and thus unfit to further serve in the Army.

In January 2020, she was dismissed from the Army.

One month later, Sgt. Byun made an appeal to the Army to rethink their decision to dismiss her from her job.

When they rejected her appeal, she then filed an administrative suit to court on Aug. 11, 2020, arguing that the Army’s treatment toward her was unconstitutional.

She launched a formal legal battle, and held a press conference with the Army Human Rights Center to promote her case and campaign for transgender rights.

But before her case was resolved, Byun committed suicide in March at her house in Cheongju, North Chungcheong.

Her family took over the late sergeant’s case and carried on with the suit.

In response to the court’s ruling on Thursday, the Army said that it respects the court’s decision but has not yet decided whether to appeal.

Under a conscription system, Korea requires all healthy men to serve in the military for at least 21 months.

However, the late Sgt. Byun joined the army by choice, as a volunteer non-commissioned officer.

The late staff sergeant’s case gathered substantial public interest because she was the first Korean active-duty soldier to have gender reassignment surgery.

With no anti-discrimination laws in the country, Korea is still a conservative country not very tolerant of LGBTQ+ communities.