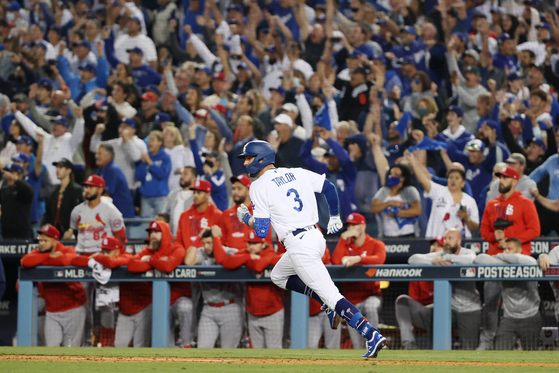 
Kim Kwang-hyun's shot at the 2021 MLB postseason is over before it ever really began, with the St. Louis Cardinals dropping the National League Wildcard game to the Los Angeles Dodgers 3-1 on Wednesday.

Kim, who was dropped out of the Cards' starting lineup in the last few weeks of the season, spent the entire game in the bullpen.

The Cardinals held their own against the Dodgers for eight and a half innings, scoring first in the first and then giving up a solo homer in the fourth to tie the score at 1-1. That remained the same for the bulk of the game, with the Dodgers finally breaking through with Chris Taylor's walk-off home run at the bottom of the ninth inning.

With the loss, the Cardinals' shot at the postseason is over. Kim spent the entire game in the bullpen — as it was a relatively low-scoring affair, starter Adam Wainwright pitched five and one third innings, with Luis García, Giovanny Gallegos, T.J. McFarland and Alex Reyes each taking a turn from the bullpen.

This year's wildcard was the second of Kim's short major league career.

Last year, Kim started one game for the Cardinals in the Wildcard series — a special series introduced last year due to the shortened Covid-19 season. In that game, against the San Diego Padres, Kim pitched three and two third innings, giving up three runs on five hits. The Cardinals went on to lose the series.

Kim's departure leaves Choi Ji-man of the Tampa Bay Rays as the only Korean players still active in the playoffs.

The Rays will begin their postseason with the American League Division Series against the Boston Red Sox on Thursday evening, or at 9 a.m. on Friday in Korea.

Last year, the Rays made it all the way to the World Series, where they lost 4-2 to the Dodgers. Choi had some clutch moments throughout the campaign, recording 10 hits, eight runs, four RBIs and two home runs throughout the playoffs.