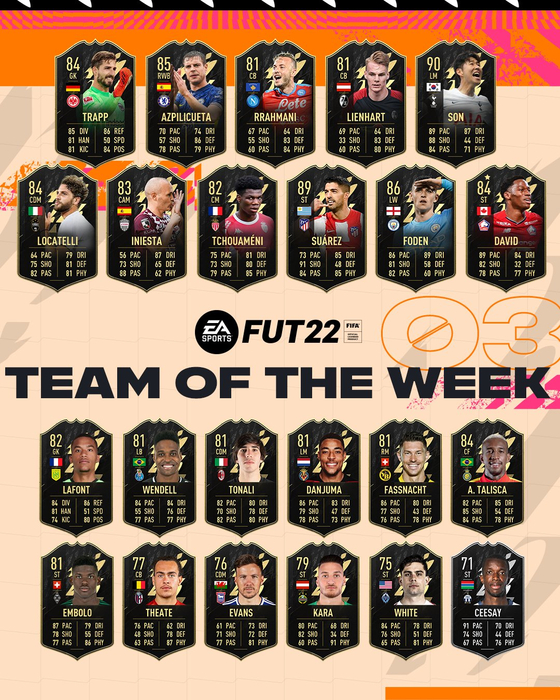 An image posted on the EA Sports FIFA Twitter account shows the team of the week for the FIFA 22 game, including Tottenham Hotspur forward Son Heung-min. [SCREEN CAPTURE]


Tottenham Hotspur forward Son Heung-min was named to the EA Sports FIFA team of the week on Thursday, joining the top 23 players picked from league's around the world as part of the FIFA 22 video game.

EA Sports, manufacturer of the FIFA games, on Thursday tweeted out an image of the team of the week as part of the FIFA Ultimate Team card game available within the FIFA 22 game.

The Team of the Week is announced each week based on the players that played best in the real world the previous week. The accolade impacts the game, with those players having boosted stats and altered card art for that week only.

Son picked up his first assist of the season during Spurs' 2-1 win over Aston Villa on Sunday. Although he was quiet on the goal front, the Korean striker was praised for his performance as a playmaker.

Like many other articles, The Independent pointed out that although Kane remains in the Spurs squad, the leadership role has started to shift to Son.

"While Harry Kane is yet to score this season, Son has delivered meaningful returns in four of the six matches he has played in so far this campaign - which is a solid haul despite the lingering questions of Nuno Espirito Santo’s playing style," the Independent said.

Hwang Hee-chan of Wolverhampton Wanderers was also named to both Crooks' and the Independent's lists, but was left out of the FIFA team.

Son has been included on an EA Sports FIFA list before. In June, footballing legend Pelé included Son in his personal FIFA Ultimate Team squad in the FIFA 21 video game. Pelé named Son to the squad alongside a lineup of footballing greats both past and present, pushing the Korean forward back to a midfield position as he tried to cram as much offensive power as possible into the team.