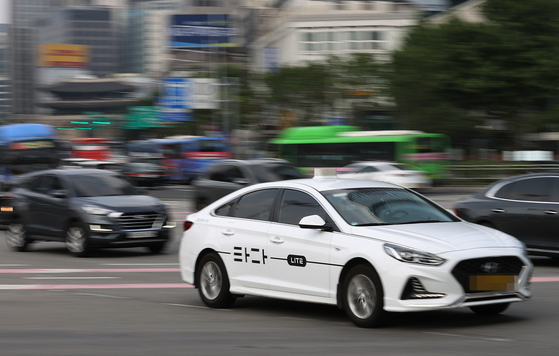 The fintech company behind Toss, Viva Republica said Friday it signed an agreement to acquire a 60 percent stake in VCNC, the operator of Tada.

Tada was fully owned by mobility start-up SoCar, founded by Lee Jae-woong, a Korean start-up pioneer and founder of the online platform Daum.

Viva Republica said in a statement Friday that Toss will be expanding its financial businesses into the mobility service industry.

“The taxi market in Korea generates an average of roughly 12 trillion won annually,” said Lee Seung-gun, Viva Republica CEO. “Half of those revenues are made through cab hailing apps.”

Tada, which began in 2018, was one of the fastest growing cab hailing services. It has over 2 million users.

However, Tada became very controversial after the taxi industry argued that it was exploiting legal loopholes.

Unlike other taxi companies, Tada used 11-passenger vans. At the time, the domestic transportation law allowed rental cars with a capacity of 11 to 15 seats to be legally leased with a driver.

The government sided with the taxi drivers and amended the law to restrict the use of vans for taxi services.

Due to the conflict with the government, Lee Jae-woong stepped down as CEO of SoCar in March 2020 and was succeeded by VCNC CEO Park Jae-uk.

Since October 2020, Tada has been offering a sedan taxi service, Tada Light.

Viva Republic, the fintech company which started with a mobility payment service, has been expanding aggressively in recent years.

It has expanded its services to banking and stock brokering, becoming a comprehensive digital financial platform.

Toss has over 20 million users and monthly active users of 13.9 million, neck and neck with Kakao Bank.

Viva Republica said its interest in expanding into the mobility industry is the success of Grab, which dominates the cab hailing market in Singapore, Malaysia and Vietnam.

It offers its services in eight countries.

Grab, which started as a cab hailing service in 2012, has expanded into food and parcel delivery as well as financial services such as insurance.

The biggest challenge is whether Tada can compete with the current market giant, Kakao Mobility.

Kakao Mobility holds a market share of more than 90 percent in the cab hailing business in Korea.

When pushing for the amended legislation that restricted Tada’s van cab service, the government claimed the changes would contribute to an improvement in the cab hailing market by encouraging new companies to enter the market. But there have been none.

SoCar, which will still own 40 percent of Tada, said it is excited by the collaboration with the fintech company.

“We are now venturing into a new challenge jointly with Toss, which leads in financial innovation,” said SoCar CEO Park. “We hope to make a new leap by providing innovative services that go beyond the boundaries of different industries."

SoCar is preparing for an initial public offering in 2022.