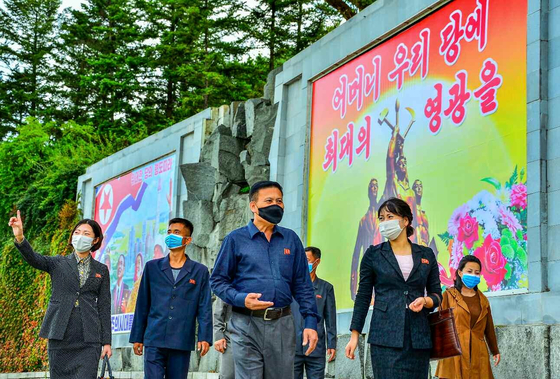 Despite indications of North Korea's continued activity at its Yongbyon nuclear complex, leader Kim Jong-un appears to be engaging in a charm offensive to lure both South Korea and China to increase negotiating leverage with the United States.

Pyongyang restored cross-border communication lines last Monday and indicated willingness to improve inter-Korean relations but has simultaneously been demanding a change in attitude from Seoul and a withdrawal of what it claims to be "hostile" policies. Likewise, Pyongyang has been flaunting its friendly ties with Beijing amid signs of increased trade with China.

This comes after a series of new missile tests, including a hypersonic weapon, by Pyongyang in recent weeks and as North Korea analysis website 38 North reported that Pyongyang still appears to be operating its uranium enrichment plant and nuclear reactor at the Yongbyon complex.

The website reported Friday that satellite imagery shows "water being discharged from Aug. 25 to at least Sept. 9" at the key five-megawatt reactor. No water was observed on Oct. 1, but it was detected again the next day.

It added that while no other indicators of reactor operations, such as steam emissions from the generator building, had been observed, "intermittent discharge is not uncommon when the reactor is operating."

On Wednesday, 38 North also found that recent satellite imagery indicated continued construction activity at the uranium enrichment plant at Yongbyon. Satellite imagery from earlier on Oct. 1 showed that previously reported construction in an area north of the plant's Cascade Hall 2 has recently been covered.

North Korea didn't appear to hold a military parade or any major show of force during its 76th founding anniversary of its ruling Workers' Party Sunday, said Seoul military sources. 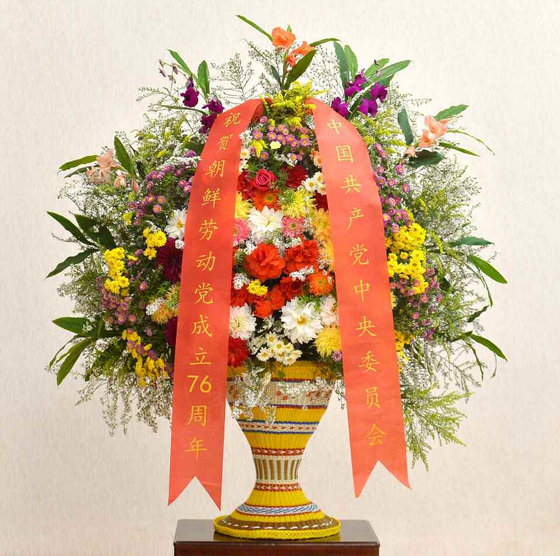 Likewise, North Korea last Wednesday vowed to do its "utmost to continuously strengthen and develop" its friendly relations with China, as the two countries marked the 72nd anniversary of the establishment of bilateral diplomatic ties.

The North's Foreign Ministry in a report posted on its website heralded the birth of a "new-type" of bilateral relations with China.

The traditional friendship between North Korea and China "personally forged by the leaders of elder generations of the two countries" is being further developed into "a new strategic level as required by the new era thanks to the deep personal relations" between leader Kim and Chinese President Xi Jinping, said the statement.

China, which has been under strict lockdown because of Covid-19 quarantine measures, has recently lifted some of its restrictions on its border with North Korea.

According to a report from the South's Korea International Trade Association (KITA), trade between North Korea and China recorded $28.8 million in August, up 37.8 percent from the previous month. North Korea bought cooking oil, sugar, and seasonings from China, which has been in short supply in the country for a long time. North Korea-China trade has maintained an upward trend for the third consecutive month.

The World Health Organization (WHO) said in a report earlier this month that it has begun shipping Covid-19 medical supplies to North Korea through the Chinese port of Dalian.

This also indicates that North Korea, which likewise has been under strict lockdown since the beginning of the pandemic last year, may finally be easing its border controls.

Analysts point out that North Korea may be laying the groundwork for when it eventually enters "unconditional dialogue" with the United States. Seoul and Washington have held working-level discussions on humanitarian support for the North, which could include Covid-19 vaccines.

Washington also said it supports efforts to "expedite" humanitarian aid to North Koreans, including getting exemptions through the UN Security Council sanctions committee.

"Even when we disagree with a particular regime, we believe that we must work to the best of our ability to do all we can to alleviate the suffering of the people," said Ned Price, spokesman of the U.S. State Department, in a briefing Thursday. "And so we continue to support international efforts aimed at the provision of critical humanitarian aid" to North Korea.

Price did stress, however, that North Korea is "responsible for the humanitarian situation in the country" and "continues to exploit its own citizens, to violate their human rights, to divert resources from the country's people to build up its unlawful WMD [weapons of mass destruction] and ballistic missiles program."

He continued, "We are involved in efforts to facilitate the provision of humanitarian aid to the neediest in North Korea. This is most evident, I would say, in our ongoing work to expedite approvals in the UN 1718 Committee for organizations from around the world to deliver lifesaving aid" to the North.

South Korea's National Security Council (NSC) convened Thursday and noted that the inter-Korean communication lines have been restored and are operating normally and said that it "decided to further strengthen communication and cooperation with the concerned countries while continuing to seek for ways to resume dialogue with the North as soon as possible."

The NSC, convened under Suh Hoon, director of the National Security Office, also reviewed the recent changes in the Korean Peninsula situation and emphasized that "stability at the current stage is very important" and stressed that "military tensions not be created," said the Blue House.

Andrew Kim, former director of the U.S. CIA's Korea Mission Center, said in a webinar hosted by the Washington Times Foundation Tuesday that Pyongyang was "disappointed" by the Joe Biden administration's middle-ground "calibrated" approach as it had wanted an "action-for-action" approach.

"I'm sure Pyongyang was patiently waiting to hear what the new U.S. administration's North Korea policy would look like, but I believe they were eventually disappointed," said Kim. "The reason I'm saying that is that Pyongyang was probably hoping to see a more concrete road map from the U.S. side, adopting an action-for-action approach, with giving some credit to North Korea for what they have done for the last four years."

North Korean officials, he said, had relayed that they wanted more recognition from the United States for its moratorium on nuclear and long-range missile tests since late 2017.

Kim said "the last thing the United States would like to see" is have Kim Jong-un travel to China for the Beijing Winter Olympics next February at the same time as President Moon Jae-in "and having Xi Jinping brokering a meeting with the three of them," without the United States.