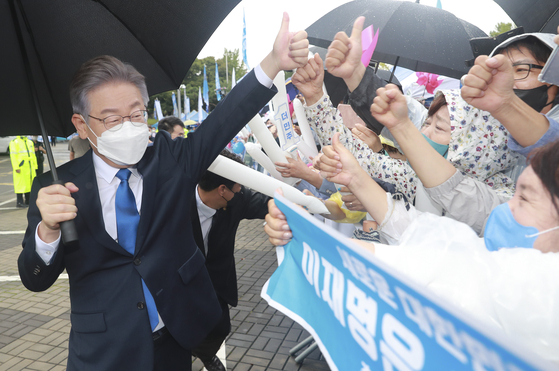 Gyeonggi Gov. Lee Jae-myung meets with his supporters at Olympic Park in Songpa District, southern Seoul, on Sunday. Later in the evening, Lee was announced the winner of the ruling Democratic Party's primary for the presidential election next year. [YONHAP]

He was followed by former prime minister and former chairman of the DP Lee Nak-yon, who won 39.14 percent of the total.

The tallied votes incorporate the outcome of the DP’s 11 primary races held from Sept. 4 to Oct. 10, in which only the DP members could vote, and three sets of electoral votes involving registered party members and the general public.

The race began in Daejeon and South Chungcheong on Sept. 4 and ended with Gyeonggi on Oct. 9 and Seoul on Oct. 10.

Until the end, Lee maintained the No. 1 spot in all races except those in Gwangju and South Jeolla, in which Lee Nak-yon won with 47.1 percent of the votes.

Lee Jae-myung won the majority in two previous sets of electoral votes, but lost big to Lee Nak-yon in the last. Lee Nak-yon won 62.37 percent of the vote and was followed by Lee Jae-myung at 28.3 percent, Choo at 8.21 percent and Park at 1.12 percent.


In his acceptance speech, Lee emphasized policies that would ensure equality for people of all backgrounds in the nation, and heighten Korea's standing abroad as a nation that provides public goods for global communities.

"We are situated in a time of a great transformation," Lee said in a televised address immediately following his nomination. "My first objective, if I am elected president, would be to help Korea take the lead in fighting climate change, the global pandemic and the ever-speedy technological revolution. My second objective would be to help this nation achieve economic growth during this time of great struggle. When it comes to policies to boost the people's welfare and well-being, there is no left or right; there is no ideological differences. I am ready to try anything and everything if it means the people can lead better livelihoods."

This wasn’t the first time that Lee has thrown his hat into the ring of presidential contenders. He ran in the DP primary for the presidential election while he was the mayor of Seongnam, Gyeonggi, in 2017. He came in third at the time, losing to President Moon Jae-in and outvoted by then-South Chungcheong Gov. An Hee-jung.

In the coming months ahead of the election in March, the Gyeonggi governor faces a number of challenges in addition to competing against his adversary from the opposition People Power Party (PPP), who will be nominated on Nov. 5. Contenders in the PPP race include former Prosecutor General Yoon Seok-youl, five-term lawmaker Hong Joon-pyo, former four-term lawmaker Yoo Seong-min and former Jeju Gov. Won Hee-ryong.


Gyeonggi Gov. Lee is embroiled in a growing scandal surrounding the development project in Daejang-dong of Seongnam that dates back to the years when he was the mayor of the city, from 2010 to 2018.

The scandal centers on revelations that a small, obscure private asset management company, Hwacheon Daeyu, and its affiliates reaped profits of more than 1,000 times their investments after it was made a partner of the 2015 project.

The scandal has ensnared politicians from across the political spectrum, with Gov. Lee facing scrutiny for his role in the project and his relationship with Hwacheon Daeyu’s owner Kim Man-bae, a former journalist who interviewed Lee in 2014.

Yoo Dong-gyu, former acting president of the city-owned Seongnam Development Corporation, was arrested on Oct. 3 on charges of breach of trust and bribery under the Special Economic Crimes Act. He is accused of designing a profit distribution scheme that favored certain private companies that invested in the Daejang-dong project, causing the city losses.

Suspicions have also been raised that Yoo may be close to Lee, as Yoo served as head of the Gyeonggi Tourism Organization after Lee was elected governor of Gyeonggi in 2018.

Lee on Oct. 4 expressed his regrets regarding the scandal, but only to the point that he "feels very bad" that an employee under his supervision was involved in "something unsavory concerning the affairs I was in charge of."

Lee has also drawn the attention of his critics by continuing in the race without giving up his position as governor of Gyeonggi. Usually, candidates holding public office tender their resignation as they announce their bid to run for a race in order to prevent possible conflicts of interest or ill use of public funds.

Lee’s critics called on him to resign from the governor position since he announced his bid in July, citing their concerns that Lee may abuse his position as governor to try to win the support of the voters. The recent decision by the Gyeonggi provincial government to provide 250,000 won ($200) in Covid-19 stimulus checks to all Gyeonggi residents regardless of their income levels was hailed by some voters as fair, while others called it a populist policy.

In a phone call with Yonhap News on Sunday, Lee repeated his intention to “maintain the current position [as Gyeonggi governor],” but added that he is “listening to all kinds of advice within the party,” leaving all options on the table.

By law, Lee can maintain his position until 90 days before the presidential election in March 2022. His deadline is therefore early December.

But if Lee does maintain his post until then, he will face a number of restrictions in his campaign, as a head of a local government office is barred from taking any action to promote a candidate in an election that may influence the decision of voters within the district, according to the Public Official Election Act.

This will rob Lee of a prime chunk of time, lasting about a month, to advertise his candidacy freely until the finalist is nominated from the PPP.

Lee, 58 this year and having held two public offices, has been swept in several scandals before, some of which remain unresolved to this day.

One of them concerns actress Kim Boo-sun who alleged since 2010 that Lee, who has been married since 1991, had an affair with her for about 15 months starting December 2007. Lee has denied all allegations.

Lee was also accused of abusing his power to have his older brother be hospitalized at a psychiatric ward in 2018. Lee was investigated and the court pronounced him innocent in 2019.

Like current President Moon and his liberal predecessor Roh Moo-hyun, Lee was also a human rights lawyer before he entered politics. Lee became a member of the liberal Uri Party in 2006. He clinched victory in the election for Seongnam Mayor in 2010 and served two terms after being re-elected in 2014. Lee’s popularity rose in 2017 in particular, when Lee’s fiery comments blasting former President Park Geun-hye and her power abuse scandal was welcomed by her critics.

Lee's campaign, which has emphasized his goals to reduce social inequality in Korea, has put a spotlight on Lee's childhood of growing up in a less than well-to-do family.

Lee was born fifth out of seven children in his family living in Andong, North Gyeongsang, in 1963. His father had dropped out of college and the family was said to have often struggled with debt because of the senior Lee’s gambling habits. Lee’s family moved to Seongnam when he graduated from elementary school. Lee was sent to work at a factory, at which point he sustained an injury to his left arm while working with a machine making baseball gloves. He never received proper medical treatment for it and suffered its costs, as his left arm is still bent at an angle. The injury exempted him from Korea's mandatory military service.

Lee is said to have studied on his own to pass exams to gain admission to the law school at Chung-Ang University in 1982. He passed the bar in 1986 and opened an office in Seongnam in 1989.