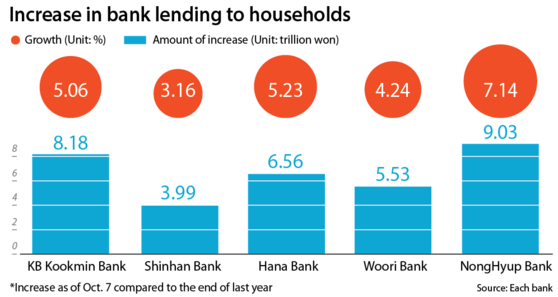 It's only going to get tougher for households to borrow from banks as the year wears on.

The government is trying to cap on-year household debt growth at around 6 percent, and major commercial banks are already close to that target.

They only have about 13 trillion won ($10.9 billion) left to lend between now and Dec. 31, and soon enough they may be forced to suspend some of their loan programs. NongHyup Bank has already done just that.

As of Oct. 7, loans outstanding to households by the five largest commercial banks in the country — KB Kookmin Bank, Shinhan Bank, Hana Bank, Woori Bank and NongHyup Bank — totaled 703.44 trillion won. That is 4.97 percent more than the 670.15 trillion won since the beginning of the year.

If the banks push the cap to 6.99 percent, loans outstanding could go as high as 717 trillion won. That would allow for some 13.55 trillion won of fresh loans through the end of the year.

Considering that lending to households from the banks grew by 13.78 trillion won during the July-September period this year, limiting debt growth to 13.55 trillion won in the fourth quarter may not be easy.

This is why some banks have suspended some lending for the time being.

Internet-only KakaoBank suspended a number of loan products this month, including overdrafts and jeonse loans, until the end of the year.

Other banks are tightening credit in other ways.

Banks are also lowering the upper limit on loans available to borrowers.

Previously, the borrower would have been able to take out 480 million won in loans, 80 percent of 600 million won.

Hana Bank will follow with the same jeonse loan limitations from Oct. 15.

Toss Bank, which opened Oct. 5 and is the country's third internet-only bank, is also feeling the heat.

As of Oct. 8, it had already extended 300 billion won of loans, which is 60 percent the 500 billion won limit recommended by the financial authorities. At this pace, the bank might have to suspend its loan programs in the next week.

"As regulations have been placed to tighten loans to households, demand for loans is ballooning at banks that still offer loans with relatively easier terms," a source from a local commercial bank said. "In the end, banks could race to suspend all loan programs one by one."

The financial regulators are not letting up.

They are scheduled to release additional measures to curb household debt mid-October, and they are considering advancing the schedule for imposing debt service ratio (DSR)-related regulations. The DSR is the ratio of debt payments to total income.

No damage for those in need