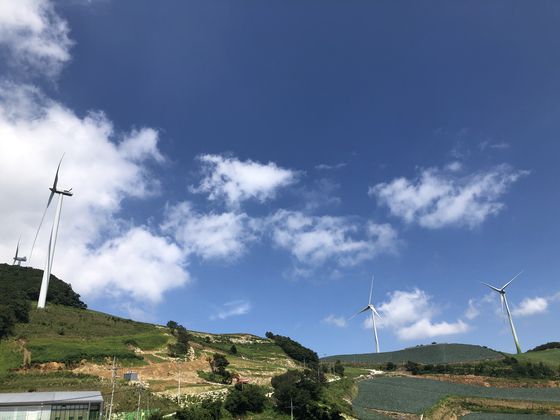 A wind farm in Gangneung, Gangwon. The Korean government has raised its 2030 greenhouse gas emissions reduction target to 40 percent of 2018 levels.

Disbelief is corporate Korea’s reaction to the government’s latest carbon plan, .and even some academics are skeptics as they analyze the expensive program.

Under the plan, the government is raising its carbon cutting goal, but it has not provided many details. It has also not addressed the issue of how these goals can be met in a country so dependent on manufacturing.

On Friday, the Presidential Carbon Neutral Committee upped the 2030 carbon-cutting goal to 40 percent of 2018 levels, from an earlier 26.3 percent.

“Carbon neutrality by 2050 has become a standard in international society that we can’t avoid,” said Yun Sun-jin, a Seoul National University professor and the head of the Presidential Carbon Neutral Committee. “We will try to draw different paths toward carbon neutrality.”

The government in its statement acknowledged that achieving its newly revised goal would be challenging, but it added that such changes are a testament to the Korean government’s strong will in achieving carbon emissions reductions.

It noted that Korea’s carbon emissions plan would force the country to cut emissions 4.17 percent annually on average, which is more aggressive than other countries, including Britain and United States, at 2.81 percent annually, or the EU’s 1.98 percent a year. 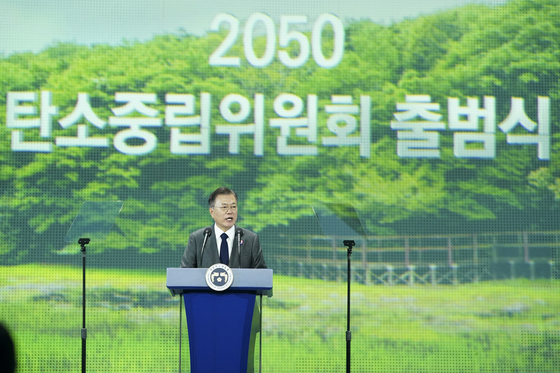 President Moon Jae-in announces the launching of the Carbon Neutral Committee in May at the Dongdaemun Design Plaza in Seoul. [YONHAP]


The latest government revision of its target was made a month after Prime Minister Kim Boo-kyum told lawmakers that President Moon Jae-in raised the need to increase the target to at least 40 percent.

“Industries argue that huge investments have to be made in order to meet the changes even if the target is raised to 30 percent,” Prime Minister Kim said during a hearing at the National Assembly. “The international community is on the path to cut back on carbon emissions, and we can’t avoid it.”

Due to the more aggressive target, it is likely that the government will further push its renewable energy agenda.

The Moon government since taking office has been advocating the replacement of conventional energy sources, not only fossil fuels but also nuclear energy, with solar and wind.

The problem, critics say, is that the administration’s plan lacks detail and is especially lacking in analysis related to the government’s phase out of nuclear energy.

A recent study by the Ministry of Government Legislation estimated that under the administration's carbon neutrality plan, which includes the phasing out of nuclear energy, the country will face 1,067 trillion won in losses in its energy production over the next 30 years.

The ruling Democratic Party has argued that the study was overblown.

“It is a figure that is ridiculously exaggerated,” said DP lawmaker Yang Yi Won-young.

Others argue that the losses in energy production could be much bigger.

“Considering the costs of establishing a system that would counter the uneven supply of renewable energy as well as inflation and the additional costs in setting up energy storage systems, the estimated 1,000-trillion-won loss could be too low,” said Noh Dong-seok, Seoul National University’s nuclear energy policy center researcher.

This year, the government changed the billing system for power consumption.

Under the new billing system, international fuel prices are used to adjust retail prices quarterly rather than annually.

The government recently raised electricity rates for the last three months of the year citing increases in global energy prices.

The government’s plan for increasing renewable energy is expected to further increase costs.

Many European countries, which have increased the ratio of renewable energy in their energy mix, have recently been experiencing so-called greenflation.

Greenflation is inflation on materials that are used in producing renewable energy, such as cooper and aluminum.
The costs of renewable energy have gone up this year especially in Europe, which has experienced a decline in wind compared to the previous year, contributing to a decline in the production of wind power.

Covid-19 has added to greenflation.

To meet the new government target of 40 percent, additional shut downs of fossil fuel generators will likely have to be made.

Democratic Party lawmaker Kim Seong-hwan told the National Assembly on Oct. 5 that in order to meet the 40-percent cut in carbon emissions, an additional 15 to 21 coal-powered generators have to be shut in the next decade.

“The Ministry of Trade, Industry and Energy not only has no plan but does not even have [accurate information] on the current situation,” Kim said.

Noh of the Seoul National University research center said carbon neutrality is a path that the country cannot avoid.

However, he says the government in setting its target needs to be more open to the public and disclose information including cost estimates.

A public discussion will lead to finding solutions to address potential risks, including the volatility of energy supply caused by renewable energy.

Chey Tae-won, head of SK Group and the Korea Chamber of Commerce and Industry, expressed concern over the government’s new target.

“In order to cut back on carbon emissions more than the current target, future technology. such as hydrogen-based steelmaking as well as carbon capture, use and storage, is necessary,” Chey said. “But it’s uncertain if these technologies will be developed by 2030.”

He said with the existing technology, a 40-percent reduction target is unrealistic.

Chey asked the government for help stressing that it is a goal that can’t be achieved only with efforts from the private sector.

He requested that the government fund aggressive R&D in climate-change-related technologies.