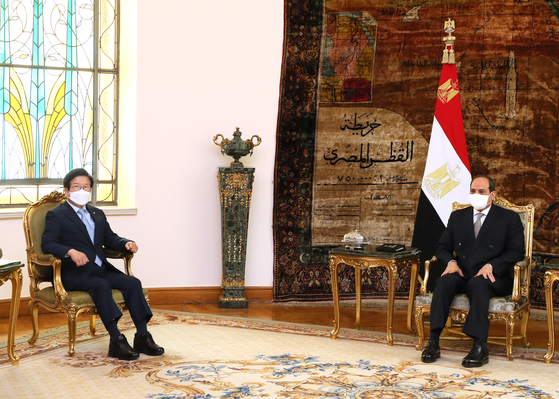 During his meeting with the Egyptian president at the Presidential Palace in Cairo, Park asked for Egypt’s support in Korean projects, including making additional railcars for the Cairo metro, exporting Hanwha Defense's K9 Thunder self-propelled howitzer, potentially giving Korean technological support for the El Dabaa nuclear power plant and constructing shipyards near the Suez Canal.

In particular, the National Assembly speaker highlighted the competence of the Korea Hydro & Nuclear Power (KHNP), which is showing active interest in the construction of turbines for the El Dabaa plant. “Korea has experience in safely operating 24 nuclear reactors and is well acknowledged around the world for its technology, as shown in the successful operation of the Barakah nuclear power plant in the United Arab Emirates,” Park said.

The two also exchanged views on ongoing international issues in the region of common interest to the two countries: namely, new developments in the humanitarian crisis in Libya and the Palestinian question, as well as peace on the Korean Peninsula.

The Egyptian president confirmed his country’s support for the continued safety and stability of the Korean Peninsula, while speaker Park praised Egypt's role as a pillar of security and stability in the Middle East and Africa. Park additionally commended Egyptian overtures to forge a political settlement of the crises facing the region.

President Sisi also commended Korea’s recent efforts to maintain calm between the Palestinians and Israelis and improve the humanitarian and living conditions of the Palestinians.

El-Dabaa nuclear project could be in doubt due to sanctions