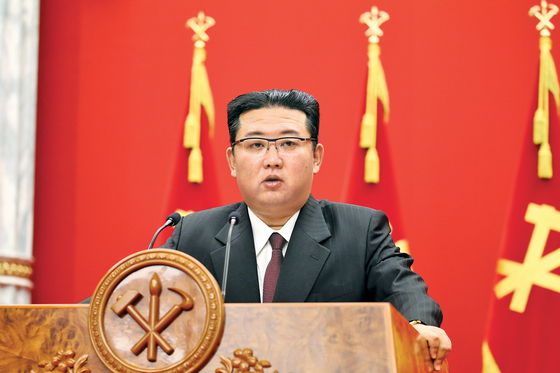 
North Korean leader Kim Jong-un stressed the need to improve people's lives in a speech to mark the 76th anniversary of the founding of its ruling Workers' Party, state media reported Monday.

However, his “important speech” did not contain any message on foreign affairs including inter-Korean relations, the United States or nuclear power.

According to the English-language report, Kim said the country faces “huge tasks for adjusting and developing the state economy in an overall way” which requires a “correct development plan and scientific guarantee.”

He added that the “only way for dynamically pushing forward the unprecedented crucial work despite [the] grim situation is for the entire Party to get united” and “concentrate the Party guidance on one direction true to the fighting line.”

Kim then called on party officials to work on the “new development of socialist construction” and to strengthen the “monolithic leadership system of the Party Central Committee,” the KCNA reported.

This marks the first time Kim delivered a speech to mark the Workers’ Party's founding anniversary since he took power in December 2011.

He gave the speech at the Central Committee office building and highlighted “the brilliant achievements made in our Party building for the last ten years.”

Attendees included members of the North’s Presidium of the Political Bureau, secretaries of the Central Committee, regional officials and military leaders.

North Korea has faced economic difficulties due to strict border restrictions following the outbreak of the coronavirus at the beginning of last year and the stringent sanctions regime in place to curb its nuclear and missile weapons programs.

Thus, Kim may be attempting to strengthen internal unity amid the Covid-19 pandemic lockdowns, prolonged sanctions and a series of natural disasters, including flooding, which has led to food shortage in the country.

North Korea did not report of holding a major military parade to mark the party’s founding anniversary like it did last year. Instead, it held art performances, galas, concerts and firework events in Pyongyang and its provinces to mark the occasion.

Last month, North Korea held a scaled down midnight military parade to mark the 73rd anniversary of the country's founding, attended by leader Kim. However, Kim did not deliver an address, and no new strategic weapons were displayed.

The KCNA reported Monday that to mark the party founding anniversary, the National Symphony Orchestra held a concert at the Moranbong Theatre in Pyongyang, and other performances were held by opera singers and acrobatic troupes. Men’s and women’s taekwondo teams competed, and dancing parties for the youth, students and members of women's unions across the country also took place to celebrate the occasion.