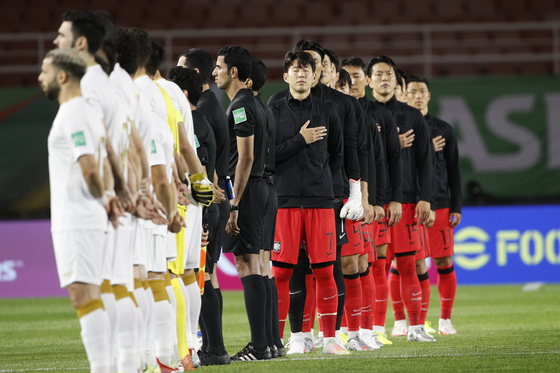 Captain Son Heung-min and the Korean national football team stand for the national anthem before a game against Syria at Ansan Wa Stadium in Ansan, Gyeonggi on Oct. 7. [NEWS1]


The Korean national football team faces its biggest challenge of the third round of qualifiers for the 2022 Qatar World Cup on Tuesday as they take on long-term rivals Iran at Azadi Stadium in Tehran.

Korea and Iran have been two of the most dominant forces in Asian football since the 1960s, and have regularly faced off at continental and global tournaments. They've developed a fierce rivalry throughout that time, although in the last 20 years it has swung heavily in Iran's favor.

Korea last beat Iran in the quarterfinals of the 2011 Asian Cup. Since then, Iran has gotten the edge on Korea and the two sides have drawn twice. Their most recent fixture on June 11, 2019 ended in a 1-1 draw.

Of the 31 games the two sides have they first met in 1958, Iran has won 13, Korea has won nine and they have drawn nine times. Korea has never beaten Iran in Tehran.

This time the two sides face off as the top two ranked teams in Group A of the third round of Asian qualifiers for the 2022 Qatar World Cup. Iran tops the group with nine points, followed by Korea with seven points. The United Arab Emirates, Lebanon and Iraq all have two points and Syria has one point.

Korea started off their third round action with a disappointing 0-0 draw with Iraq at the start of December. A 1-0 win against Lebanon followed a few days later, giving the Taeguk Warriors a much-needed three points. In both games, what should have been an all-star Korean offense made up of some big name European club players proved ineffective, struggling to work together or have any impact on the score.

The third game pitted Korea against Syria last week, with an increasingly comfortable but still tepid Korea taking a 2-1 win. The win strengthened Korea's position going into the Iran game and saw captain Son Heung-min pick up a goal for the first time this round.

Following the Iran game, Korea will take on the UAE on Nov. 11 and then begin the second-leg fixtures against Iraq on Nov. 16.

With the the top two teams advancing to the 2022 Qatar World Cup, Korea and Iran both look highly likely to comfortably progress. As such, Tuesday's fixture is as much about getting one back against an old rival as it is about picking up another three points.