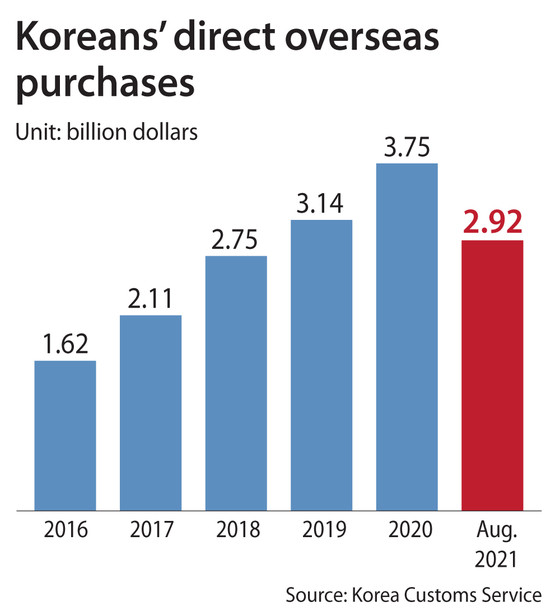 Shopping on overseas websites continued to grow, with health supplements and home appliances leading the trend.

According to the Korea Customs Service (KCS), Koreans purchased $3.75 billion worth of goods directly from overseas shopping websites last year, up 19.5 percent on year. A total of 63.6 million transactions were made, up 47.9 percent on year.

Products worth $2.9 billion were purchased this year through August, but the KCS didn't give a percentage increase. There were 55.5 million transactions made, 87.4 percent of last year’s figure.

Big sales on overseas shopping sites, such as U.S. Black Friday and China's Singles' Day, both in November, are coming up, so this year's figure is expected to surpass last year’s by a big margin.

Many people shop on overseas websites despite international shipping costs because products are not available in Korea or are steeply marked up. According to a Korea Consumer Agency (KCA) survey of 1,000 people who shopped on overseas websites last year, 75.2 percent said they did so because things were cheaper.

Apparel ranked third with 8.1 million purchases and food products came next with 5.3 million. Cosmetics and perfumes accounted for 3.5 million transactions.

With more people directly purchasing from overseas, complaints from consumers are also on the rise. Many involve package forwarding services, which take delivery of orders for people and forward them to Korea for a fee.

Based on other KCA data announced in September, 10.6 percent of 700 people who used package forwarding services to purchase from overseas websites within the past year said they encountered problems.

Online shopping up 15 percent in February