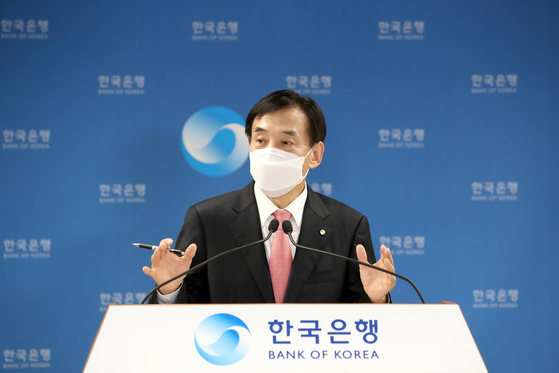 Bank of Korea Gov. Lee Ju-yeol speaks during an online press briefing held Tuesday after the monetary policy board voted to maintain the country's base rate at 0.75 percent. [BANK OF KOREA]

The central bank may soon raise rates again, Bank of Korea Gov. Lee Ju-yeol said Tuesday after the monetary policy board voted to maintain the base rate at 0.75 percent.

“I think we can think of raising rates at the next meeting,” he said. “The country's monetary policy  remains accommodative considering the recent growth of the domestic economy and the rise in consumer prices."

The monetary policy board raised the base rate by 25 basis points at its previous meeting, held in August, from a record low rate of 0.50 percent. It was the first increase in 33 months.

While the central bank had been signaling a rate increase, recent instability in global markets convinced the monetary policy board to pause the moves upward.

“The board agreed to decide on an additional rate hike after monitoring how global risks and the country's financial imbalances affect the local economy," Lee said.

Risks from outside include potential monetary tightening in the United States, a possible default by China's Hengda Real Estate Group, the main unit of Evergrande, and a power supply crunch in China.

Local stocks have been falling, with the benchmark Kospi dropping below 3,000 earlier this month.

According to Lee, the domestic economy continues its robust recovery and is expected to maintain stable growth. Inflation is expected to remain around the mid-2 percent level for some time, higher than the bank's target of containing inflation at 2 percent, as commodity prices rise.

But financial imbalances, especially fast increasing asset prices and high household debt levels, must still be dealt with despite the rate increase in August, he added.

According to data from the central bank, household debt rose by 10.3 percent on-year in the second quarter to roughly 1,806 trillion won ($1.5 trillion), a new record, despite an imminent rate increase, and Lee added household debt continued to grow at a fast pace until last month.

Among the seven members of the board, including Park Ki-young who recently filled the seat vacated by Koh Seung-beom, who left to chair the Financial Services Commission, two members — Lim Ji-won and Suh Young-kyung — suggested a 25 basis point increase.

"There has been a consensus among most members of the board that if the situation does not vary much from what the board has been expecting, that it will be desirable to consider raising rates at next month's meeting," Lee said. "Taking into consideration developments in all the relevant factors, the board will appropriately adjust the degree of monetary policy accommodation."

The central bank on Tuesday maintained its gross domestic product (GDP) growth projection for 2021 at around 4 percent, consistent with the forecast in August.

The International Monetary Fund projects Korea's economy to grow faster. According to its announcement Tuesday, it expects Korea's economy to expand by 4.3 percent this year, maintaining its projection made in July. This is the highest figure among projections made by institutions at home and abroad. While the Korean government expects 4.2 percent growth, the Organization for Economic Cooperation and Development and Moody's Investors Service project 4 percent.