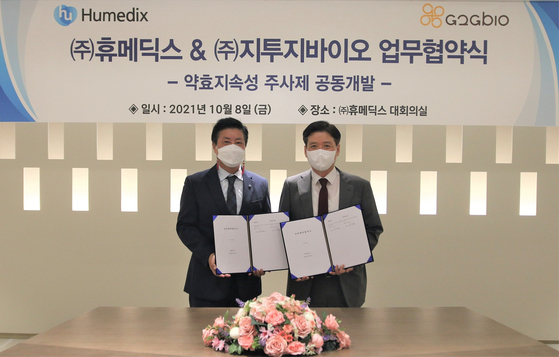 
Humedix signed an agreement with Daejeon’s G2GBIO to cooperate on the development of long-acting injectable drugs, the Kosdaq-listed biopharmaceutical company said Tuesday.

Long-acting injectable drugs refer to those that persist in the body for an extended period of time. The intervals between injections can be between about one month and three months, unlike to conventional drugs that must be injected or consumed every day.

Under the agreement, Humedix, 40.64 percent owned by Huons Global, will help with the development and marketing of GB5001, a G2GBIO treatment candidate for Alzheimer’s disease. G2GBIO has been developing an Alzheimer’s disease treatment that is effective in the body for about one month per injection.

“By sharing our strengths, Humedix and G2GBIO will develop long-acting injectable drugs that can have competitiveness in the global market.” Humedix CEO Kim Jin-hwan said in a statement.