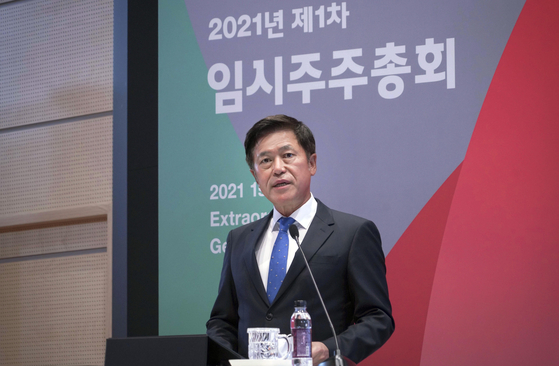 
SK Telecom shareholders approved the spinning off of a new company focusing on semiconductors and ICT, SK Square, the first major restructuring of the company since it was founded in 1984.

The spinoff was approved by 99.95 percent of those present at an extraordinary shareholders meeting Tuesday. The company, to be led by SK Telecom CEO Park Jung-ho, will start business on Nov. 1.

The core business of telecommunications will retain the name SK Telecom. It will be relisted on the Kospi exchange on Nov. 29. Trading of SK Telecom shares will be suspended for a month from Oct. 26.

The new SK Telecom will have 60 percent of the assets of pre-spinoff SK Telecom, while SK Square will have 40 percent.

SK Square will work with SK hynix, SK’s semiconductor company, on aggressive mergers and acquisitions in the semiconductor sector. It will also invest in semiconductors, media, security service and online shopping companies.

“The main purpose of the spinoff is to maximize value for shareholders,” CEO Park said. “We will grow our portfolio even more in the market and return the fruits of our success back to the shareholders.”

The spinoff is expected to bring the market caps of both SK Telecom and SK Square higher, according to analysts.

“The new SK company will have its subsidiaries such as One Store and ADT Caps go public, so the total sum of their market caps will be higher than now,” read a report by eBest Investment & Securities issued on June 11.

“Considering the growth potential of its subsidiaries, the new company’s performance in the stock market is expected to go smoothly compared to other spinoffs from holding companies,” read another report from Heungkuk Securities issued on the same day.