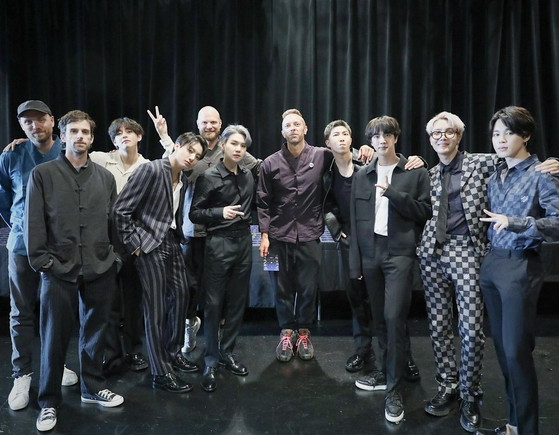 BTS and Coldplay in New York on Sept. 23, a day before the release of their single ″My Universe″ on Friday. [BTS TWITTER]


“My Universe,” a collaborative track between BTS and Coldplay, ranked No. 12 on Billboard’s Hot 100 chart this week, 11 spots lower than its No. 1 ranking on the chart last week.

"My Universe" initially took the top spot from Australian rapper the Kid Laroi and Justin Bieber who's single "Stay" ranked No. 1 for six consecutive weeks.

On the Digital Songs Sales chart, "My Universe" retained its No. 1 spot for the second consecutive week. With this feat, BTS has become the artist with the most hits to top the chart over a period of 45 weeks.

The single will be included on Coldplay’s ninth album “Music of the Spheres,” set to be released Friday.