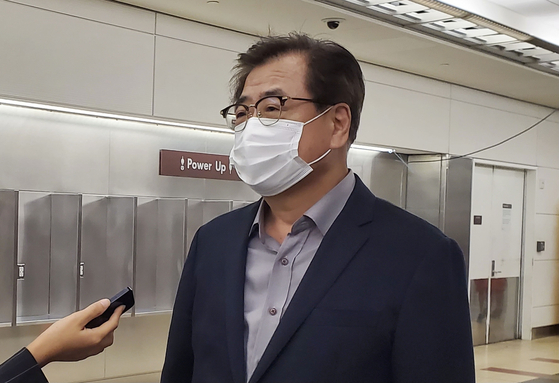 Suh Hoon, director of national security, speaks to a group of reporters at the Reagan airport upon his arrival in the United States on Monday. Suh will be in Washington this week to meet with his counterpart U.S. National Security Advisor Jake Sullivan amongst others. [YONHAP]

Suh Hoon, director of national security, said Monday that he plans to discuss President Moon Jae-in's recent proposal to declare an end to the 1950-53 Korean War in the United States this week.

“The communication channels between the two Koreas are up and working again, it is time to reaffirm where we stand on inter-Korean and North-U.S. relations,” Suh told a group of reporters upon arrival at Reagan airport on Monday.

“The declaration to end the Korean War will also be discussed [with my counterparts],” he said, adding that the denuclearization of the Korean Peninsula and possible sanctions relief for North Korea may also be included in the conversations.

The Moon government from its early days has been calling for a formal declaration to end the Korean War, with the call repeated again at the United Nations General Assembly meeting in New York last month, when Moon gave a speech. The Korean War ended with an armistice, not a peace treaty, leaving the two Koreas technically still at war.

Suh was scheduled to meet with his counterpart U.S. National Security Advisor Jake Sullivan on Tuesday. Sullivan had just returned from a meeting last week with China’s top diplomat and senior foreign policy advisor Yang Jiechi in Zurich, Switzerland, which resulted in an agreement for U.S. President Joe Biden and Chinese President Xi Jinping to meet virtually in a summit before the year’s end.

Asked if he thinks the North Korean issue may be dealt with in the U.S.-China summit, Suh said, “If the summit takes place, I believe the Korean Peninsula issue will be one of the top agendas in the discussions.”

Suh may discuss with Sullivan the possibility of a dialogue between Biden and North Korean leader Kim Jong-un. When asked what he thinks could be preconditions for such a dialogue to take place, Suh said, “I will ask my American counterparts.”

The Biden administration has since April put forward a North Korea policy that would take a "practical and calibrated" approach to Pyongyang and has offered dialogue anytime, anywhere, “without any preconditions.”

But it’s also made clear that it will not offer incentives just for the sake of having talks.

North Korea, on the other hand, has made clear what it wants as preconditions for a dialogue with the United States, which include ending regular joint military exercises between Washington and Seoul and sanctions relief. Washington has annually extended its sanctions on the North since 2008.

In the latest statement from its top diplomat, Pyongyang took issue with the United States’ provision of its nuclear umbrella in the region, as well as its latest pact with Australia and Britain to develop nuclear submarines.

“[North Korean Ambassador Kim Song] noted that today’s global nuclear arsenal has grown, alongside the threat of its use,” reads the statement by United Nations General Assembly’s Disarmament and International Security Committee on Monday.

“[He said] the more than $700 billion military budget of the United States covers the development of state-of-the-art hardware and updating plans for the use of nuclear weapons against its foes while also deciding to transfer nuclear submarine technology to Australia,” said the statement. “The Korean Peninsula remains a ‘hot spot’ due to Washington’s policy against the Democratic People’s Republic of Korea [DPRK], including nuclear blackmail.”

DPRK is the acronym of the full name of North Korea.

Earlier in the year, it launched cruise missiles on Jan. 22 and March 21 and short-range ballistic missiles on March. 25.

Under UN Security Council resolutions, the North is prohibited from testing ballistic missiles but not cruise missiles.

These provocations, Kim said, are the North’s “self‑defence efforts.”

“As such, Pyongyang is bolstering its self defense efforts and safeguarding its national interests, he asserted,” said the UN statement. “Condemning and rejecting double standards, he emphasized that the country possessing the largest nuclear arsenal must take steps towards progress.”