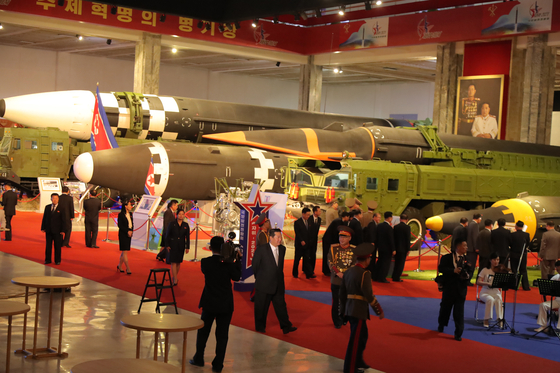 
North Korean leader Kim Jong-un said that South Korea was not the reclusive regime's "main enemy" as he opened an exhibition showcasing his country's most advanced military hardware, according to state media reports on Tuesday.

Tuesday was the first time for a defense exhibition to be held in lieu of a military parade, which usually takes place on the anniversary of the Workers’ Party’s founding, celebrated annually on Oct. 10.

Speaking on Monday at the Defense Development Exhibition, held at the Three Revolutions Exhibition Hall in Pyongyang, Kim also argued the country “has to become strong” before weighing its options with regards to external relations, according to the state media outlet Korean Central News Agency (KCNA).

“It is the ultimate goal and unwavering will of the Party that we should possess and continuously develop invincible military power, such that no one can touch us,” Kim said, referring to the military policy of the North’s ruling Workers’ Party.

Kim said during a speech marking the party's founding anniversary on Sunday that neither South Korea nor the United States were the target of the North’s armed forces and claimed that the main purpose of his country’s military build-up was to deter against war itself.

Even as Kim claimed that his country’s military forces were mainly a deterrent to war, he still blamed the United States for tensions on the Korean Peninsula and accused the South of hypocrisy for developing its own weapons while criticizing the North’s weapons program.

South Korea is also in the middle of a multi-billion-dollar drive to step up its military capabilities. Seoul in September successfully tested its first submarine-launched ballistic missile (SLBM), making the country the eighth in the world to prove its SLBM technology.

Lambasting the South’s previous descriptions of the North’s weapons tests as “provocations,” Kim said, “What is more dangerous is [the South Korean] military’s justification for the modernization of their armaments and their hypocritical and intensive dual attitude.”

North Korea has launched seven missile tests thus far this year. It launched a new anti-aircraft missile on Oct. 1, not long after testing a hypersonic missile on Sept. 28. It also conducted tests of new cruise missiles over the weekend of Sept. 11-12, as well as two train-launched ballistic missiles on Sept. 15. It also launched cruise missiles earlier in the year on Jan. 22 and March 21 and short-range ballistic missiles on March. 25.

However, Kim bristled at descriptions of these tests as posing danger to the South. “In South Korea, the words ‘provocation’ and ‘threat’ are used exclusively for North Korea,” he said.

Kim criticized the “double standards” of the allies and called for the “withdrawal of hostile dialogue policies,” which North Korea has insisted on as requirements for South Korea and the United States.

Analysts suggested that Kim's mention of South Korea as not being a target for the North is an attempt to persuade the United States to withdraw its forces from the Korean Peninsula and end sanctions against the North.

Washington and Seoul are allies, and the United States stations around 28,500 troops in South Korea to defend it against the North, which invaded in 1950.