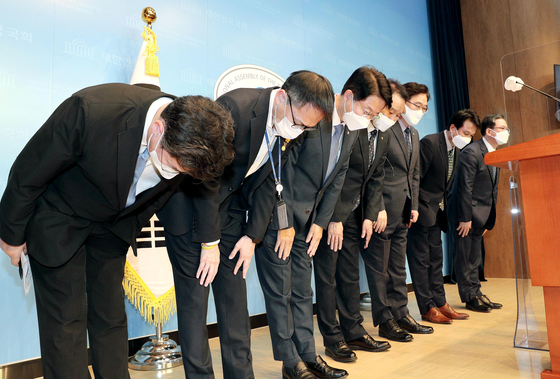 Gyeonggi Gov. Lee Jae-myung's primary campaign managers announce the dissolution of the campaign during a press conference on Tuesday at the National Assembly in western Seoul. The primary for the ruling Democratic Party ended on Sunday with the nomination of Lee. [LIM HYUN-DONG]

Ruling Democratic Party (DP) Chairman Song Young-gil said Tuesday that the nomination of Gyeonggi Gov. Lee Jae-myung as the party's presidential candidate is not up for dispute -- despite an appeal from the runner-up, former Prime Minister Lee Nak-yon.


Gov. Lee was nominated Sunday as the DP’s candidate for the presidential election next March after he won 50.29 percent of the votes in the primary race. He was followed by former Prime Minister Lee, who won 39.14 percent.

Former Prime Minister Lee’s campaign managers on that night decided to file a complaint to the party’s election committee, raising a question about the votes cast for former candidates in the primary, former Speaker of the National Assembly Chung Sye-kyun and Rep. Kim Du-kwan.

Lee Nak-yon’s campaign said those votes should be counted because the same rulebook says that “all official voting results should be added together and the candidate who wins the majority will be nominated.”

According to Lee’s campaign staff, the clause “all official voting results” could be interpreted to include all votes that were cast and announced for the two candidates before they withdrew from the race.

If this logic holds, it would mean Gov. Lee did not win a majority in the primary because he would have won 49.31 percent of the total votes cast, including for the two former candidates.

DP chairman Song, however, nixed the possibility on Tuesday.

“The election committee members unanimously decided [that the votes cast for the two former candidates while they were still in the race] are invalid, in accordance with the party's constitutional rules,” Song said in an interview with TBS radio on Tuesday. “There is no need to reconsider what has already been concluded.”

Song said that while a DP supreme council meeting will be held on Wednesday to discuss the matter, he does not expect the party to change the primary results.

“[Lee’s campaign managers] probably lodged the complaint as part of an effort to appease their supporters,” Song said in the interview. “I think that candidate Lee, with his experiences as the prime minister and former DP head, will make a rational decision that is the best for the party.”

Song on Monday reportedly advised Gov. Lee to resign from his post to focus on the election in March.

Lee said during a press briefing on Tuesday that he will continue to hold his current position as head of the Gyeonggi provincial government and submit to the National Assembly’s regular audit of public officials. His hearings are scheduled for Oct. 18 and 20.

By law, Lee has to resign, at the latest, 90 days before the presidential election, which will give him a deadline of early December.

Critics called Lee’s decision so far in maintaining his governorship whilst running for presidency unfair, citing concerns that Lee may abuse his position of power to influence voters’ decisions.