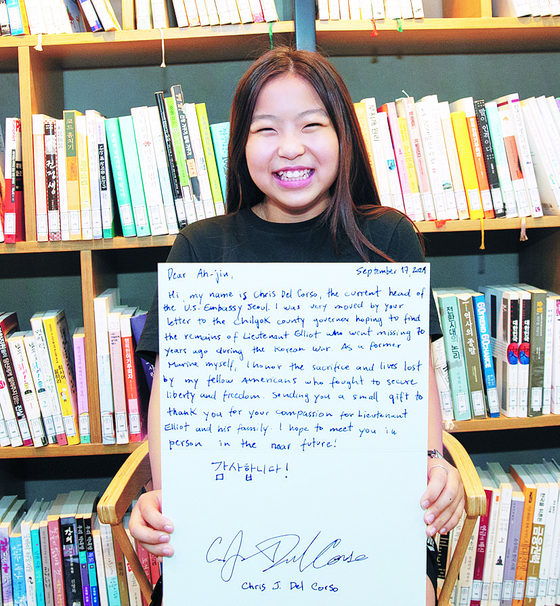 
Acting U.S. Ambassador to Seoul Christopher Del Corso wrote a thank-you note to an 11-year-old girl after coming across her letter to her county mayor in North Gyeongsang, asking the local government to find the remains of a missing soldier who fought during the Korean War (1950-53), according to Chilgok County Office on Monday.

Del Corso shared the letter on the U.S. Embassy’s social media and posted his own handwritten letter to Yoo A-jin, the Korean girl who wrote the letter, thanking her for her compassion toward the missing U.S. soldier and his family.

“I was very moved by her letter to the Chilgok county mayor, hoping to find the remains of Lieutenant Elliot,” read Del Corso’s letter.

“As a former marine myself, I honor the sacrifice and lives lost by my fellow Americans who fought to secure liberty and freedom.”

Yoo A-jin, 11, wrote a handwritten letter to Chilgok county Mayor Baek Seon-ki in July, asking him to find the remains of Lieutenant James Elliott, a U.S. military officer who went missing in the Battle of the Nakdong River on Aug. 27, 1950.

According to Chilgok County Office, Yoo first became passionate about the cause when she encountered Hoguk Bridge, also known as the Bridge of Patriotism, while on a daily exercise run with her family in the county.

Hoguk Bridge is a landmark of an early fierce engagement in the Korean War, called Nakdong River Defense Line Battle. The 55-day battle began in August 1950 when North Korean troops advanced to the southeastern city of Busan. Victory went to the democratic nations, but it came at the cost of over 600 lives.

It was at this bridge that Yoo found a memorial plaque that recounts the story of Lieutenant Elliott’s disappearance during an overnight operation that was part of the Nakdong River Defense Line Battle.

The plaque also read that the lieutenant’s wife waited over 60 years for her husband’s return, but died of cancer without seeing him, in 2014.

After her death, their children who live in United States helped their parents reunite by spreading a small portion of their mother’s ashes in the Nakdong River under Hoguk Bridge.

Georgia Rayburn, Lieutenant Elliot’s daughter who is now 73 years old, has been reported saying that she still hangs a black flag at her house in remembrance of her missing father.

“I was heartbroken by the fact that Lieutenant Elliot’s daughter and son who are both over 70 years old are still waiting for their father,” Yoo wrote in her letter to the county governor.

“I have never been apart from my parents, but I feel it would be deeply distressing beyond imagination. I am extremely grateful for the lieutenant who fought for my country, and hope that we can now return our gratitude to Lieutenant Elliot by returning him to his home in the United States.”

Del Corso at the U.S. Embassy in Seoul said that he came across Yoo’s letter through the news.

Along with his letter, Del Corso also sent her a photobook about the Korea-U.S. alliance that is worth around 100,000 won ($83).

Rayburn expressed her gratitude for Yoo on her social media account that same month.

“Ms. Yoo’s letter made me proud of my father’s sacrifice for Korea,” the Rayburn’s post read.

Baek also made photocopies of Yoo’s letter and distributed them to all of the current soldiers of the Chilgok Battalion who are in charge of excavating the remains of soldiers from the Korean War, in the county.

According to the members of the battalion, Yoo’s letters remind the soldiers of their work’s significance.

Yoo is currently a fifth grader at Waegwan Elementary School in Chilgok County.

Is it you, Flubber?