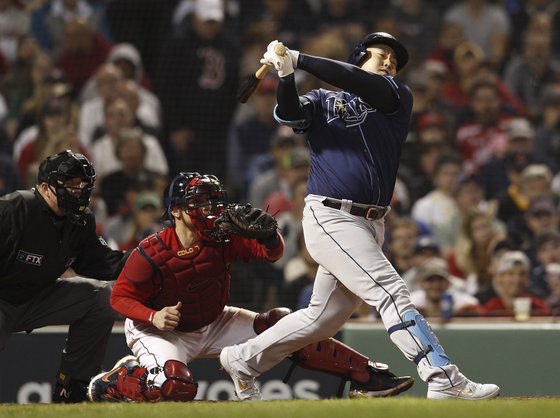 
Tampa Bay Rays first baseman Choi Ji-man was unable to do anything to help his side as they crashed out of the American League Division Series, losing 6-5 to the Boston Red Sox in Game 4 on Monday.

Choi had two trips to the plate as a pinch hitter during the game, striking out and grounding out in the seventh and ninth inning. The 6-5 loss in Boston puts the Rays down town 3-1 on the series and headed home emptyhanded. It's a crushing end to a dominant year for the Florida club which topped AL East with its first ever 100-run season.

Monday's performance was fairly typical of a disappointing postseason for Choi. After sitting out Game 1 on Oct. 7, Choi started on Oct. 8, picking up a hit and a solo home run in the sixth inning that wasn't enough to stop a 14-6 loss at home for the Rays.

Choi spent the rest of the series on the bench, picking up two at bats as a pinch hitter in both Game 3 and Monday's Game 4, but failing to record a hit. In seven at bats throughout the postseason, Choi recorded two hits and one run for a .286 ERA.

Choi headed into the postseason with a .229 batting average with 59 hits and 11 home runs on the season. Those numbers weren't terrible, but they aren't the big slugging figures that Choi was able to throw up a couple of seasons ago.

In terms of postseason stats, 2021's ERA is actually Choi's best for a postseason so far, but both of his previous outings — in 2019 and 2020 — saw the Korean slugger face considerably more pitches.

Choi and the Rays departure from the 2021 postseason means that there are now no Korean players left competing for major league baseball's biggest prize.

Kim Kwang-hyun was the only other Korean with a shot at some postseason action, as the St. Louis Cardinals made it to the NL Wildcard game, but lost to the Los Angeles Dodgers 3-1 last week. Kim spent that entire game in the bullpen.

Ryu Hyun-jin and the Toronto Blue Jays also got close to the Wildcard, winning their final game of the season with Ryu on the mound to potentially reach a tiebreaker, only to have both the New York Yankees and Red Sox win on the final day of the season to close that door.

Ryu, Kim Kwang-hyun, Kim Ha-seong of the San Diego Padres, Park Hoy-jun of the Pittsburgh Pirates and free agent Yang Hyeon-jong have all already returned to Korea for the offseason.