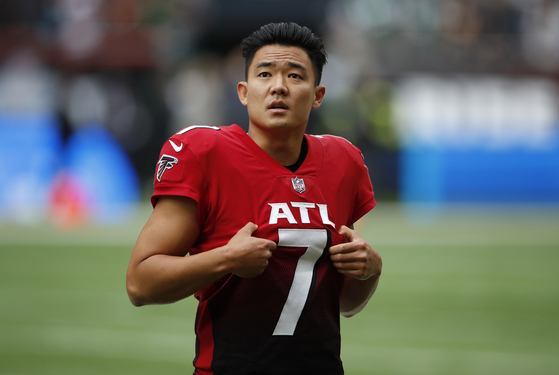 Atlanta Falcons' Younghoe Koo warms up before a match against the New York Jets at Tottenham Hotspur Stadium in London on Sunday. [REUTERS/YONHAP]


Son Heung-min may be in Iran with the Korean national team, but Tottenham Hotspur Stadium wasn't left without a Korean football superstar in his absence. While Son is out of town, Younghoe Koo and the Atlanta Falcons moved in, beating the New York Jets 27-20 in an NFL match in London on Sunday.


The Falcons and Jets headed to London for a regular season game as part of the NFL International Series, which has seen at least one game held in the United Kingdom every year since 2007, with the exception of 2020 due to the Covid-19 pandemic. A second game will be played at Tottenham Hotspur Stadium on Oct. 17 between the Miami Dolphins and the Jacksonville Jaguars.

Sunday's game was a good one for Koo, the Korea-born placekicker for the Falcons. Koo kicked in a field goal to open the scoring and put the Falcons up 3-0, a lead they held on to for the rest of the game. He added a second field goal with just seconds left in the second quarter to strengthen that lead.

Koo debuted with the Los Angeles Chargers in 2017, becoming only the fourth Korea-born player to reach the NFL. He joined the Falcons in 2019 and got off to a strong start with a particularly strong 2020 season.


Last year, Koo was invited to the Pro Bowl, the NFL equivalent of the All-Star Game, for the first time. He is only the second Korea-born player to earn the honor, after Hines Ward.

Son is currently on duty with the Korean national team in Iran. The two countries are set to face off on Tuesday night.