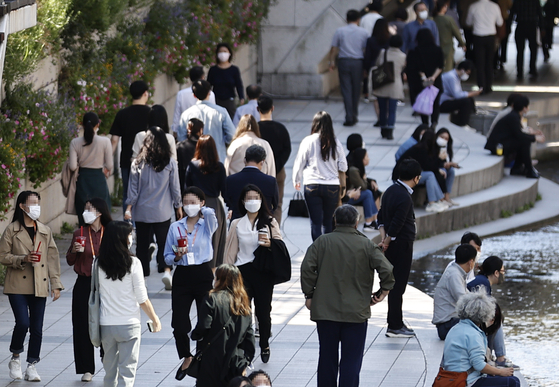 Office workers stroll along the Cheonggye stream in central Seoul on Wednesday during their lunch break. According to Statistics Korea, there were 671,000 more people employed in September, up 2.5 percent year-on-year, despite the spread of Covid-19 variant continuing. [YONHAP]

﻿Total employment increased by 671,000 jobs in September on year, the biggest jump in more than seven years.

The number of people working in Korea reached 27.7 million people last month, according to Statistics Korea on Wednesday, as the economy recovered, led by strong exports.

Most jobs created were those related to health and social welfare, which include government funded jobs for the elderly.

In transportation and storage, 163,000 more people were employed, up 11.2 percent, as online shopping remained strong.

In information and telecommunications, 97,000 more people were employed, up 11.6 percent.

A total of 98,000 education service jobs were added, up 5.6 percent on year. Hagwon private tutoring was hard hit by Covid, but the business has been improving as vaccination levels increase and classes can be held again.

In manufacturing, 37,000 fewer people were employed, a 0.8 percent dip. This is the second consecutive month in which the number of people employed in manufacturing fell year-on-year.

The decline was related to the chip shortage and the suspension of some auto manufacturing.

The number of arts, sports and leisure jobs continued to fall due to social distancing, the total down 34,000.

Gains were reported in all age groups except for the 30s age group, with 12,000 fewer people employed, a 0.2 percent drop.

"Despite the fourth wave of Covid-19, jobs in the private sector have significantly recovered especially in the service sector," Hong said. "The number of jobs in non-face-to-face and digital-transition-related areas, including information and telecommunications, science, technology and transportation and storage, have risen on year and even from August."

But he also noted that face-to-face service businesses have suffered the most.

He acknowledged the difficulties faced by the self-employed and part-time workers.

Last month, 1.28 million people worked in self-employed businesses with employees, which accounts for 4.6 percent of all people with jobs. That's 48,000 fewer than a year earlier, a 3.6 percent drop, indicating that many have been laid off.

A total of 1.2 million people were hired day-to-day, 121,000 fewer than a year earlier. They account for 4.4 percent of all people employed.


"We will not be satisfied with the overall improvement in the job figures but will further cover the difficulties that the people in vulnerable classes are facing," Hong said.