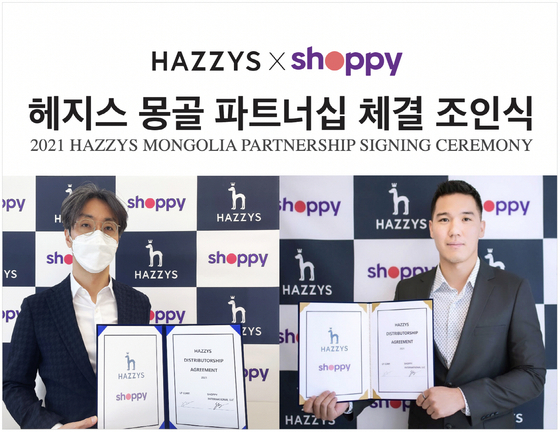 
LF’s fashion brand Hazzys will go on sale in Mongolia later this month.

LF said Wednesday it has teamed up with Mongolian e-commerce platform Shoppy to sell Hazzys clothes in the central Asian country.

Hazzys is a fashion brand that sells casual apparel, golf wear and bags.

Shoppy, which started business in 2017, is the largest e-commerce platform in Mongolia, according to LF. Its main customers are people aged between 18 and 40. More than a thousand brands across various categories, including beauty, living and food, are sold on Shoppy.

LF and Shoppy held a signing ceremony on Tuesday and agreed to jointly market Hazzys products for young customers in Mongolia.

Mongolia will be the sixth country Hazzys has entered, after China, Thailand, Vietnam, Taiwan and Singapore.

LF acknowledged the Mongolian market is not that big, with only 3.3 million people, but said it sees a lot of potential in the country as 64 percent of the population is aged 35 or below.

LF added that Mongolia’s economic growth rate has hovered between 5 and 6 percent since 2017, except for last year due to Covid-19, citing data from the Korea Trade-Investment Promotion Agency.

LF “will be able to effectively introduce Hazzys style in an attractive Mongolian market through close partnership with Shoppy, which has the knowledge and insights into Mongolian e-commerce,” said a spokesperson for LF in a statement.