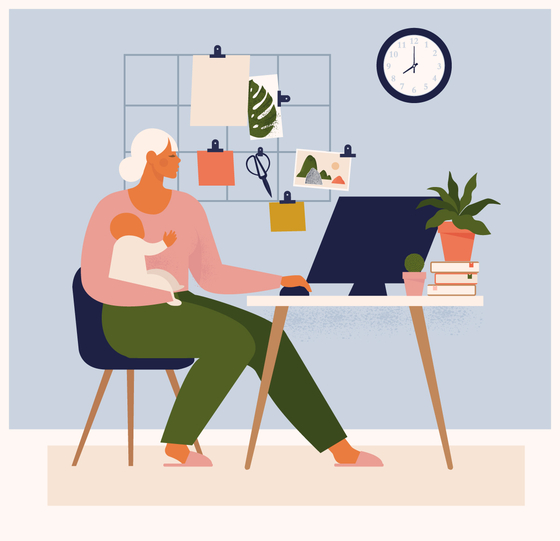 
Companies have been required to offer paid paternal leave for over 30 years.

In practice, taking time off when having a child is not that easy to do, with a slew of informal company practices getting in the way of people exercising their rights, according to a civic organization.

A woman aged 38 claims that when she took a month off in 2014 when having her first child her boss complained to other teammates that she was the only one taking maternity leave.

When she returned after her leave, she was transferred to a different team, where she was uncomfortable. She had no choice but to look for another job.

When she gave birth to her second child, in 2019, her new employer, a large financial company, was no more receptive.

"We had no other female employee taking long maternity leave. Do you have to take it?" her superior said.

A 27-year-old researcher who works at a small company gave birth to her first child in February. She requested maternity leave, but was asked to quit because no other employee had taken maternity leave in the past. Another employee who was pregnant a few years earlier could not take the pressure and left the company.

"It was so difficult to ask because no one else had taken maternity leave," she said. "The company asked me to either quit now, or quit the job after taking the leave."

The anecdotes from the two women are from a report by Jikjang Gapjil 119, a lobbying group backed by eight labor unions, including the Korean Finance & Service Workers Union and the Korean Construction Workers' Union.

The Equal Employment Opportunity and Work-family Balance Assistance Act was implemented in 1987. It says that women will be eligible for paid maternity leave 90 days before and after the birth of a child. It now allows both men and women with children under the age of 8 to take leave of up to a year.

If an employee who has been working for more than six months asks for paternity leave, the company must accept the request. Refusal without just cause could lead to a fine of up to 5 million won.

Jikjang Gapjil 119 claims that, despite the law, employees are still having trouble taking leave.

A laborer recently reported, according to the organization, that their job was gone when they returned after paternity leave. The company CEO cited "management issues" and advised the worker to resign. The next day, the employee's desk was moved. Later, the person was fired.

The number of people looking for help after receiving unfair treatment due to parental leave has been on the rise, according to the Southwestern Seoul Working Mom Support Center. 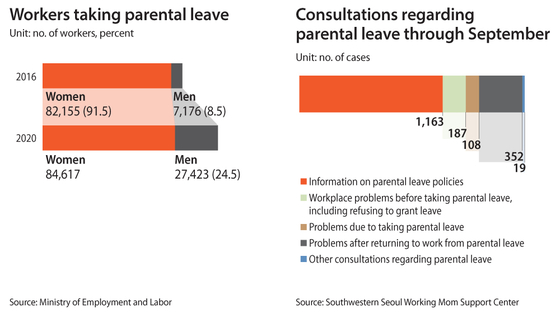 In 2017, 78 people requested consultations at the center after being penalized by their employers. In 2020, the total was 362. As of September, 352 requests were filed.

A woman who worked for Namyang Dairy Products sued the company after allegedly being removed from her post and moved to a completely very different post when she returned from a year of maternity leave in 2015.

She joined the company in 2002 and became the youngest female team leader in six years. But when she returned from her leave, her desk was placed between the parcel storage room and the office pantry, according to her testimony. She won the first court case, but lost at the appeals court. The final ruling is pending.

One in three people experiences hardship returning to their old job, according to Rep. Lee Su-jin of the ruling Democratic Party using data from the Ministry of Employment and Labor.

A third, or 34.1 percent, of the 316,431 people who took parental leave between 2018 and 2020 did not receive salary accrued during the leave, a sum the company must pay six months after the leave ends. This also includes people who quit their jobs within six months of returning from leave. The company must still pay these people, according to a revision of the law made in March 2020.

Few related cases ever make it to court and wins are rare.

According to Rep. Kang Eun-mi of the Justice Party using labor ministry data, the number of indictments made against companies that have treated their employees unfairly, such as by firing them, was six in 2018 and two in 2019 and 2020.

"The reason that so few cases have been reported is that not only is it difficult for people to prove they have been unjustly treated, but it often leads to indirect bullying or other types of disadvantages at the workplace," said Lee Jin-ah, a labor attorney at Jikjang Gapjil 119.

"It is crucial that the labor ministry takes a more active part in the issue so that maternal rights are fully protected." 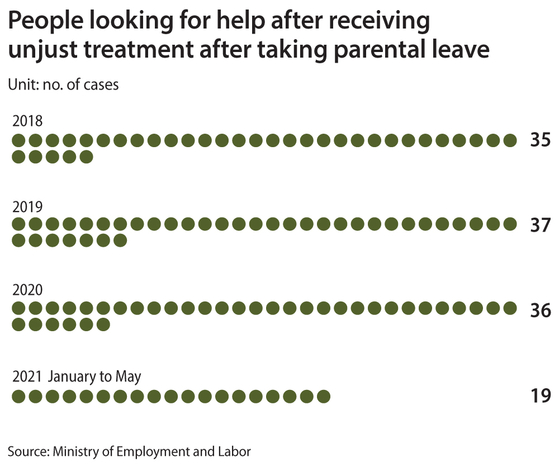 The social norm of only associating parental leave with women must change in order to achieve a more fundamental change, the organization argues.

Sweden, the first country in the world to implement paid parental leave, in 1974, mandates parental leave for men, which has contributed to substantial growth in the percentage of men taking parental leave.

Sweden gives parents a total of 480 days of parental leave shared by the parents when a child is born or adopted.

In Norway, men are given 15 weeks of parental leave, the same as women. During this period, the government covers the salary for the couple. The percentage of Norwegian men taking parental leave is close to 90 percent.

The government has initiated new policies to encourage men to take more parental leave, such as by paying three months of salary, even though it's capped at 2.5 million won a month.

According to Jikjang Gapjil 119, a 40-year-old man with children aged 3 and 7, recently took parental leave. He was the first in his company, which has a total of 200 employees. His wife had already used all her parental leave.

The man said that his company advised him to quit, because taking two years off, a year for each child, "virtually means he's not going to work." His company tried to persuade him by saying he could get unemployment benefits if he quits.

"I'm happy to be with my children when they need their parents, but it's true that I'm worried I may get penalized in the future," he said.

Advocates say that the society must work to make it easier for people to raise their children. Should it continue to be so difficult for people to pursue their careers after having children, it could be difficult to increase the country's birthrate.

"Companies can assign employees to different jobs or to unfavorable jobs after parental leave, because it's legal to move employees to posts that are either similar to the current post or pay the same salary," said labor attorney Kim Mun-jeong at the Seoul city working mom support center.

"People's rights need to be guaranteed more, such as by mandating men to take parental leaves for a certain amount of time or mandating the company to assign the same post to employees after the leave."

Hana Tour employees to return to work in October