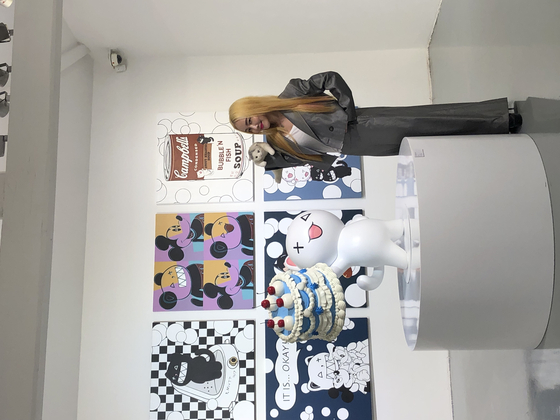 
Nancy Lang, the pop artist known for always carrying around a cat doll on her shoulder as her mascot and her daring yet peculiar performance art, revealed that happiness was the driving force behind her new artworks, currently on display at her solo exhibition “Bubble Coco.”

Lang, whose real name is Park Hye-ryeong, is better known in popular culture, having a history of many quirky appearances on television, than as an artist in the art world.

The compact-sized exhibition at Gallery Grimson in Jongno District, central Seoul, opened its doors Oct. 6. Inside, visitors are able to gaze at 28 colorful, bubbly art pieces ranging from canvas oil paintings, sculptures, and NFTs to video art, all including at least one of two cat characters in black or white, which were inspired by Coco Chanel, the name of her cat doll.

“Coco Chanel has gotten old, as she’s been with me for 13 years now,” Lang said during a press conference held on Tuesday. “I wanted to create a cartoon character version of her so she can live forever — and become an icon of hopes and dreams.”

On the two versions of the cartoon cats in black and white, Lang said, “I’m an only child, and Coco Chanel is alone as well, so I paired her up with a partner, like a couple, in my paintings. Black Coco Chanel and white Coco Chanel make up one whole Coco Chanel.”

″Bubble Play″ is one of the main works in Lang's solo exhibition, ″Bubble Coco.″ [GALLERY GRIMSON]


Lang, who was recently victorious in a strenuous divorce battle with her former husband, stressed the important role happiness has in her life, especially in her art.

“Acquaintances have told me that they feel better even just by looking at my artworks,” Lang said. “I created Coco Chanel because I wanted people, including those who don’t know much about pop art, to find happiness from it. It’s the ultimate achievement for me as an artist.”

She explained that she thinks that it is natural for life to be filled with joys and sorrows. To Lang, her divorce may have been painful, but as an artist, it helped her seek comfort and consolation through her illustrations of Coco Chanel with bubble-filled backgrounds.

“Ever since I studied at Hongik University, there’s one thing I’ve always kept in mind: An artist always conquers with their artwork,” which is why Lang has been so busy with solo exhibitions since last year. 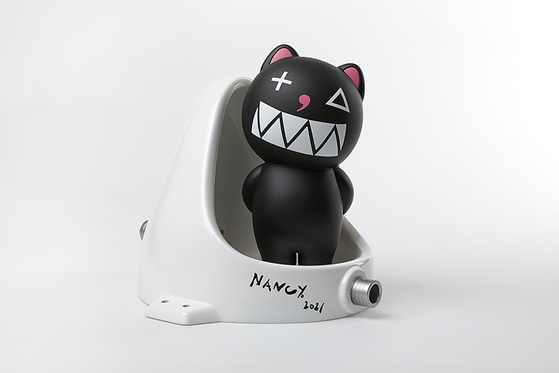 
One recurring theme of “Bubble Coco” is an homage to French artist Marcel Duchamp’s sculpture “Fountain” (1917), which depicts a porcelain urinal with the signature “R. Mutt.” It is expressed in Lang’s acrylic paintings and 3-D media art portrayed along with — you guessed it — Coco Chanel. They represent Lang’s respect for Duchamp, who had a significant role in the development of conceptual art. Lang said that with this homage, she aimed to convey hope and happiness that “transcends time and space.”

A substantial amount of other works in “Bubble Coco” pay tribute to well-known cartoon characters like Mickey Mouse, those in Sesame Street, Astro Boy and even the Michelin Man.

“Pop art usually uses imagery that the general public is familiar with,” said Lang, when asked why she used such characters in this exhibition. “I enjoyed painting cartoon characters that people, including myself, like and adore. It brought up childhood memories, so I wanted the paintings themselves to possess cheerful energy too.” 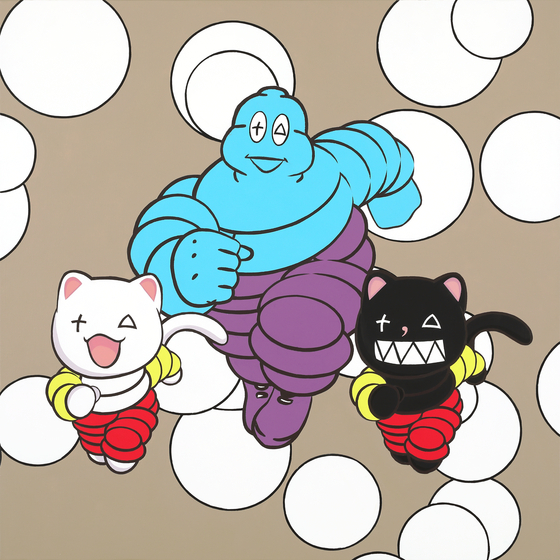 
A distinctive detail in the artworks are the cross and triangle-shaped eyes on each character, which Lang says are based on “a USB drive and the triangular theory of love.”

“A USB hole is minus-shaped, but I created a plus-shaped one. If you insert a plus-shaped USB into the hole, the entire world will reset, and Coco Chanel is the one and only creature to bear the power to do that. For the triangular theory of love, it is the meaning of hope; that the world still has it. The two concepts are contrasting; let’s just wish that we don’t have to reset everything like Noah did with his ark.”

The triangular theory of love was developed by American psychologist Robert Sternberg, stating that love consists of three components: passion, intimacy and commitment. 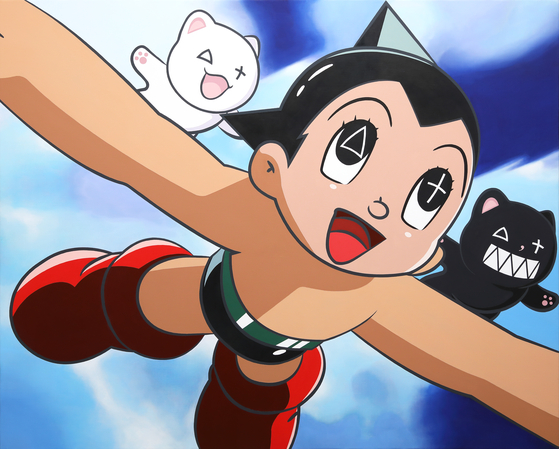 ″Now or never″ shows black and white Coco Chanels flying with Astro Boy. Lang explained that this piece is about not being afraid to try new challenges. [GALLERY GRIMSON]


Lang plans to expand the “Bubble Coco” series. She also revealed that she has had the same goal for the last three years: To produce 1,000 pieces of art. In order to be a globally renowned artist, there must be an abundant number of artworks to open separate exhibitions in many different countries, Lang says.

Lang still has a long way to go, as she explains that she has only made around 100 new pieces after she started working toward her goal. “I want to be an artist that has people wondering what I hold next,” Lang said with gleaming eyes, “until the day I die.”