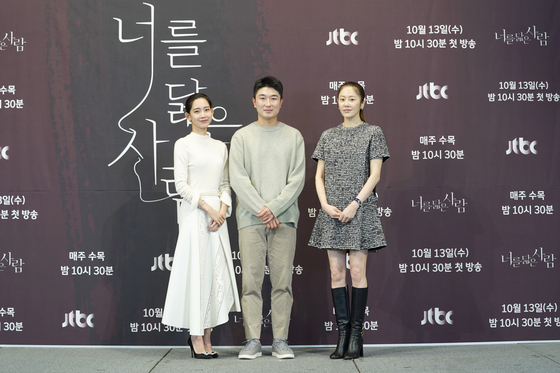 Im Hyun-wook center, director of the upcoming JTBC drama series ″Refelction on You″ attends a press conference for the show on Wednesday with actors Go Hyun-jung, right, and Shin Hyun-been, left. [JTBC]


Im Hyun-wook, director of the upcoming JTBC drama series “Reflection on you” said that the drama series is full of “twists and turns” that will keep viewers on their toes until the final episode.

During an online press conference held Wednesday, the director made an appearance together with actors Go Hyun-jung and Shin Hyun-been, who will be playing the lead roles.

“Their relationship that looks as though it was meant to be, turns out it was an ill-fated one,” said Im. “I’m so satisfied with the result and honored to work with such a respected actor Go and popular actor Shin. I really want to show it to the world as soon as possible.”

The drama is Go’s first return to the small screen in two years.

“I am so happy I was able to do this work. The character I’m playing is an imperfect person. A good opportunity in life came to her and she wanted to live it the best way she could but eventually fails. Her head is constantly interrupted by all these unnecessary thoughts like, ‘I’m so lonely,’ ‘I’m so useless,’ so I as an actor had to study her really hard.”

jtbc reflection on you go hyunjung shin hyun been

[CELEB] Shin Hyun-been can't be confined to a single genre