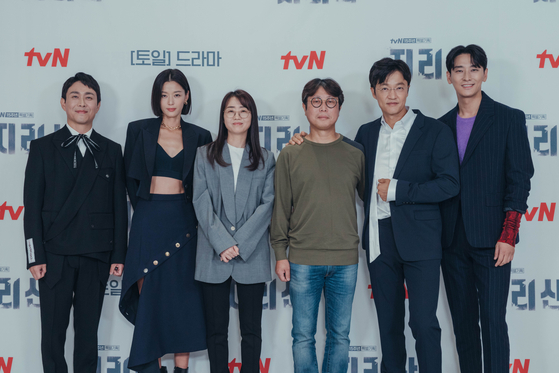 
The mere announcement of the collaboration between star writer Kim Eun-hee and star producer Lee Eung-bok on the upcoming tvN drama series “Jirisan” was enough to catch the public’s attention, fueled even more by the equally star-studded cast of Jun Ji-hyun and Ju Ji-hoon.

“Jirisan” is a much-anticipated project to celebrate the cable channel’s 15th anniversary since its establishment in 2006. Both Kim and Lee, who are the creators of hit Netflix series “Kingdom” (2019-) and “Sweet Home” (2020), have come together along with star actors. Both Jun and Ju portrayed the leads in Kim’s “Kingdom” universe.

In “Jirisan,” the two actors portray park rangers on Mount Jiri in Gurye County, South Jeolla, who act as guardians of the mountain region and resolve the mysterious occurrences and serial murders.

“I’ve never been to Mount Jiri before writing ‘Jirisan,’” Kim said during an online press event Wednesday. “But I think I’ve had a vague yearning for it. The Mount Jiri that I read about in novels and history was more of a land that people visited with their cherished desires rather than for activity. If it’s land that is layered up with countless people’s desires, regrets and sorrows, then I thought it might be possible for mysterious and wondrous things to happen there.

“When I visited the mountain to investigate, park rangers naturally became the occupations of my characters,” Kim continued. “When something happens in a city, 119 rescue squads come. In mountains, the rangers come to the rescue. What was striking about the profession was that, rangers are people who try to save people before they die, compared to other professions [that I was already familiar with] such as police detectives or medical examiners who uncover the truth behind a person’s death.”

Jun takes on the role of veteran ranger Seo Yi-gang. From the trailer previews released on the channel and social media, Seo seems to be a mix of the strong and quirky characters that Jun has previously portrayed in prior projects such as drama series “My Love from the Star” (2013) on SBS, and films “Assassination” (2015) and “The Berlin File” (2013).

However, the actor said that she did not choose the role based solely on her character’s depiction as a strong woman.

“I liked the script itself, that’s why I chose this project,” Jun said. “In this generation and era, I think it’s meaningless to differentiate between television and films, and we now live in a time where it’s natural for women to be multi-layered characters.”

Ju portrays newbie ranger Kang Hyun-jo who suffers from hallucinations due to his traumatic past.

“Kim’s writing is very descriptive and detailed,” Ju said. “You cannot miss a sentence because then you won’t be able to move on to the next scene. The advantage of Kim’s scripts are that she can write a complicated scene which actors can read with ease, which ultimately becomes the viewers. It might be entertaining to the viewers, but her writing can be demanding for actors, because they push you to the edge of your emotions. I feel like I’m continuously expanding my range of acting through her projects.”