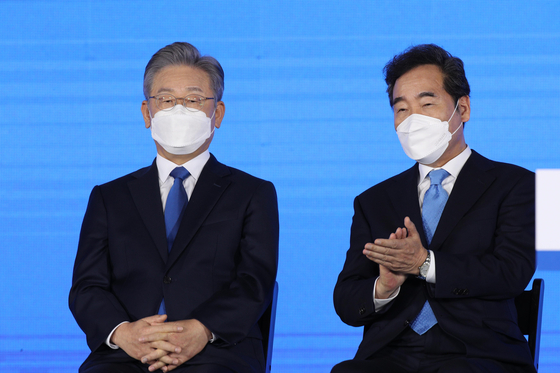 “I accept the results of the presidential primary,” Lee Nak-yon wrote in a concession message on Facebook, four days after his defeat in the DP primary race. “I congratulate Lee Jae-myung on his victory in the primary."

Lee Nak-yon said that he “respects the decision of the party affairs committee,” adding that the issue of the handling ballots of the candidates who dropped out of the race “still remains a task.”

He said that he believes that “presidential candidate Lee will do his best for the unity of the party and victory in the presidential election.”

The former prime minister also said he will “strive for the DP’s victory,” adding he is “tearfully grateful and sorry” to those who had supported him.

Lee Nak-yon’s camp on Monday appealed the victory of Gov. Lee in the primary, contesting the calculation method of the total votes after the party’s primary race which ended Sunday, bringing immediate confusion and division within the DP.

The DP party affairs committee met Wednesday to review whether the primary votes were tallied in accordance with the party's electoral rules and ultimately agreed to uphold the decision of the party's election management committee and Supreme Council, said DP spokesman Koh Yong-jin in a press briefing.

Of 76 members of this panel comprised of regional party leaders and parliamentary standing committee chairs, 64 were in favor of rejecting the appeal.

On Sunday, Lee Nak-yon, the runner-up in the primary, came shy of a shot at a runoff against Gov. Lee who narrowly scraped by with a majority, accumulating 50.29 percent of the votes in the primary race. Lee Nak-yon received 39.14 percent.

The appeal on Monday questioned the vote count and party election regulations which voided the ballots for Chung Sye-kyun and Rep. Kim Du-kwan, DP presidential contenders who had dropped out last month in the middle of the 11-leg primary race.

The ballots cast for them during the race were not counted in the final vote count, according to the rules set for the presidential primaries, which states that “votes cast for candidates who dropped out of the race will be considered invalid.”

Lee Nak-yon’s camp said those votes should be counted because the same rulebook says that “all official voting results should be added together and the candidate who wins the majority will be nominated.”

If the votes had been counted for those candidates, Gov. Lee would have won 49.31 percent of the total votes cast, falling short of the majority needed to forego a runoff.

Spokesman Koh said that the party plans to revise the election rules to clarify the language and avoid such confusion in the future.

Even earlier that morning, Lee Nak-yon camp’s urged the ruling party to “make a wise and right decision” over what to do about the DP primary results.

His election campaign said in a statement that it is “regrettable” that the DP leader already appears to have made a decision over the primary results.

They added were “shocked” by Song’s remarks Monday during a visit to Daejeon asserting that "a military coup occurred when the Democratic Party was divided."

Lee Nak-yon’s confession of defeat is expected to quell some of the rife within his party, though it might take some time for his advent supporters to fully accept the primary results.