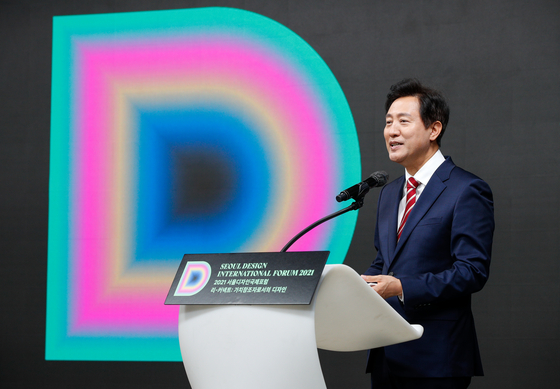 But the looks aren't his own.

Oh’s concept of beauty isn’t limited to cosmetics and fashion, but encompasses the city as a whole, from its aesthetics to its food, culture and entertainment. He hopes to utilize the beauty of each one of these to develop Seoul's unique charm and to turn it into a city that everyone wants to visit, live in and invest in.

“If beauty comes to mind when someone thinks of Seoul, it’s not just about beauty products; it also includes other products and services,” he said. “If something is beautiful, people perceive everything related to it with a good impression. I'm using ‘beauty’ in that sense.”

“However,” Oh added, “it should be true to its name.

“Only when Seoul is actually beautiful — its beauty industry developed, and the urban design is excellent — is such a brand created. So there's a lot to do.”

Oh’s blueprint for “Beauty Seoul” was included in his master plan for the city’s administration until 2030, dubbed “Seoul Vision 2030.” Of the plan's four future objectives — a city of coexistence; global competitiveness; safe living and working environment; and futurity — the cultivation of the beauty industry has been listed to make Seoul take off as a globally competitive city.

Similarly, during Oh’s first mayoral term from 2006 to 2011, he initiated the plan of “designing” the capital. The Dongdaemun Design Plaza (DDP) is the result of Oh’s major urban development design project, built on the former sports complex Dongdaemun Stadium.

The “Han River Renaissance” project, another signature project of Oh during his previous mayoral term that included installing riverside bike paths and artificial floating islands off the southern bank of the river — will be revived under the new name “Jicheon [Stream] Renaissance,” with the aim of beautifying Seoul and making global business and cultural areas.

“Charm is the source of competitiveness, regardless of whether it is a city, country or an individual,” the mayor said.

“My idea for creating an attractive city hasn’t changed,” Oh said. “And design is one way to create the city’s attractiveness.”

With Oh’s firm conviction to turn Seoul into the beauty mecca of Asia, a department under the Planning and Administration Bureau of the Seoul Metropolitan Government has been dedicated to the Beauty Seoul project since late July, along with several other related offices.

In an effort to add a dash or two of more beauty to its tourism, Seoul designated a “Beauty Road,” or a walking tour course in Seoul that includes sites where people can experience the latest makeup and beauty trends of K-pop and K-dramas. Famed beauty vlogger and makeup artist Risabae was appointed as its PR ambassador.

Dongdaemun Special Fashion Zone, which was once widely known as Korea’s oldest fashion avenue, will be reborn as the new and revitalized Dongdaemun Special Beauty Zone that features unique things to see and experience that can only be found there.

According to the Seoul Metropolitan Government, the global cosmetics market stood at 569 trillion won ($499.6 billion) as of 2019, with its average annual growth calculated at 5.3 percent. In 2020, Korean cosmetics exports saw a 16 percent increase on year, emerging as the world’s third-largest cosmetics powerhouse, behind France and the United States.

Seoul, in particular, is home to four Korean enterprise headquarters that rank in the Top 100 Global Beauty Manufacturers and is home to 45.7 percent of domestic cosmetics distributors.

The mayor, at the Seoul Beauty Industry Branding Conference held in mid-September, previously evaluated the beauty industry as “a future industry that is expected to grow continuously in line with a new consumption trend oriented toward sensibility and well-being, and a high value-added job industry.”

However, these days, Korea’s "road shop" beauty brands, or low- to mid-priced individual cosmetics shops found along the streets or via franchise networks that led the heyday of "K-Beauty," are hardly gaining momentum.

The crisis is deepening with the spread of Covid-19 and the growing feminism movement in Korea, in which women are pulling away from the conventional forms of beauty, abandoning makeup and long hair among others.

According to the Fair Trade Commission's franchising business information provision system, the number of franchise stores of six major road shop beauty brands, including The Face Shop, Aritaum, Missha, Innisfree, Etude House and Skin Food, has been decreasing nationwide every year, from 3,394 in 2018 to 2,899 in 2019 and 2,298 in 2020.

It is no longer surprising to see shops in Myeong-dong, a major shopping district in downtown Seoul, with "For Lease" signs attached to the storefronts along the main road. Data from the Korea Real Estate Board showed that the vacancy rate of small shops in Myeongdong in the second quarter of this year was 43.3 percent — more than seven times the national average.

The Beauty Seoul project has just started and is in its early stages, a Seoul official in charge told the Korea JoongAng Daily.

"Academic research for basic planning of the Beauty Seoul project was commissioned earlier this month, and this includes establishing the concept of "beauty" and its extent, monitoring the situation, and deciding which direction to take with the project," the official said.

"It is now a matter of [branding Seoul's beauty]," Oh said.